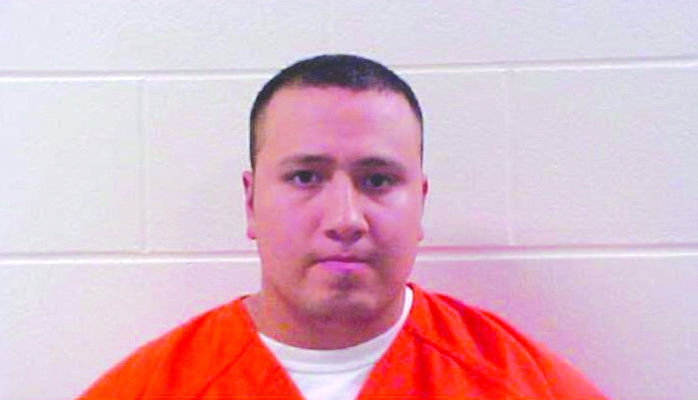 Janett Reyna was a former police officer for the Blackwell Police Department. The couple’s three children witnessed the murder and even called 911 to report the incident.

The U.S. Marshal’s Service made the announcement last week in Oklahoma City. “I just pray that everybody that sees this will somehow, if they know anything about Luis’ whereabouts or anything like that, help us bring him to justice so he can have his day in court,” said Blackwell Police Chief Dewayne Wood.

“Our 15 Most Wanted list is reserved for fugitives we consider the worst of the worst,” said U.S. Marshals Service Deputy Director David Anderson. “It is without a doubt, Frias deserves to be on that list. The U.S. Marshals and our federal, state, and local law enforcement partners will use every available resource to bring Frias to justice for this heinous crime.”
“Janett Reyna’s death not only devastated the lives of her children, it also devastated her community,” said U.S. Marshal Johnny Lee Kuhlman of the Western District of Oklahoma. “As a former police officer with the Blackwell Police Department, Reyna took an oath to protect and serve, and she did so honorably, especially for the most vulnerable.”

“When Reyna was killed, she was serving as the domestic violence prevention coordinator for the Ponca Tribal Police Department, where she worked tirelessly to protect victims from the same violence and abuse that ultimately ended her life,” said Kuhlman. “The Marshals are determined to bring Frias to justice for this senseless crime, and we implore the public to help us make that happen.”

Frias was charged with first-degree murder on August 9,2013 and a bond was set for $5 million. Authorities believe Frias fled the country and may have crossed the border into Mexico. Frias mother, Atocha Maria Beltran was arrested and charged with accessory after the fact for helping Frias allegedly get out of Blackwell and Oklahoma. Beltran was convicted in July 2014 on the accessory charge and is now serving 20 years in prison for helping her son flee the area. Neshia Niemeyer also pled guilty to an accessory charge but was given a 10-year suspended sentence in 2014 in return for testimony on Frias.

Brian Hermanson, Kay County District Attorney was also at the press conference. Hermanson earlier this year filed for subpoenas in the case against PayPal and eHarmony. However, those court records are currently sealed.

“The FBI filed an unlawful flight warrant with Frias, and we began working with them. I believe adding Luis to the Top 15 list will get him, and this case, the coverage it deserves. We’re hoping that he is finally brought to justice because of this, and I believe that they’ll finally catch him. I would love to get him in court before I, and others, are out of law enforcement. Now the Frias is one of the 25 most wanted people in America on a national level, that he will finally be brought to justice,” concluded Wood.