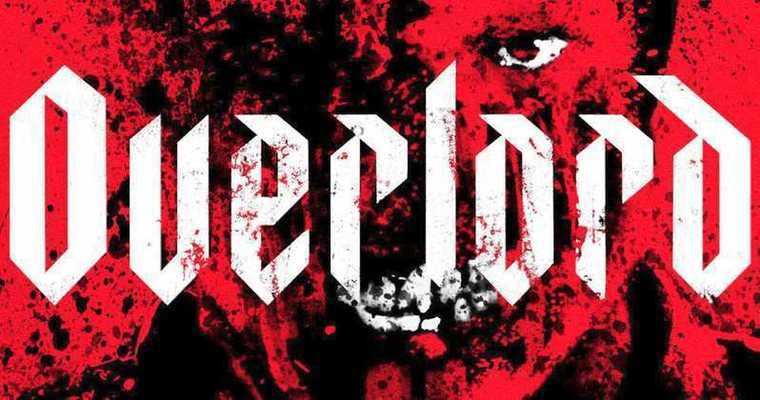 Just hours before the D-Day invasion, a paratrooper unit from Easy Company descends into Nazi occupied France to destroy a radio communications tower in a small village just past Normandy beach…only to discover that there are far more sinister things than SS Soldiers lurking in the shadows.

The film, written and directed by Avery, is a regular melting pot of charming cliches carried by equally charming actors that play their types with enough fervor and charisma that they keep the audiences sympathy and attention through the film’s brisk run time. Leading the American heroes is Wyatt Russell’s brooding, scarred, All-American Corporal Ford who clearly has a blast channeling his father- Kurt Russell- namely the iconic gravely voiced macho lead in ESCAPE FROM NEW YORK’s Snake Plissken.

Our heroes link up with a French freedom fighter Chloe played by lovely Mathilde Ollivier, and soon cross paths with the hilarious Saturday morning mustache twirling Nazi villain of the piece, Cpt. Wafner, an SS Hauptsturmführer (Captain) played by Pilou Asbaek who plays a similarly hilarious antagonist on HBO’s “Game of Thrones” as Euron Greyjoy. Of course, our G.I. Not-so-Joe’s are soon made aware that the church the radio tower is set up in is actually a terrifying laboratory full of blood, guts, and nasty experiments that seem ripped straight up from a video-game like “Return to Castle Wolfenstein” which turns this “Band of Brothers” tribute into a John Carpenter movie faster than you can say Currahee.

OVERLORD succeeds in being a kind of stupid but kind of awesome hybrid of practical effects and action, convincingly gruesome prosthetics and make-up, and somewhat historically accurate gunplay while constantly lending itself to homages of genre staples that this very well could be one day.

There’s not much “horror” here, but there’s a fresh theme that never quite gets subverted and intact gets played quite literally in the finale when Ford tells Private Boyce than the Nazi’s are sick and play dirty, and to beat them you have to play worse.

The film, shockingly in today’s climate, doesn’t really go for any moral “relevant” message about Nazis fighting a multicultural, multiracial, group of heroes and is quite simply content with having it’s characters do their actions and look cool while they’re at it.

The action, by the way, is fantastic and helped by the fact Avery knows how to frame a shot extremely well. There’s a terrific scene of the company’s airplane getting shot down that is horrifying and heart-racing, helped all the more by a pulse pounding score from Jed Kurzel who has lent his musical talents to films like MACBETH, ASSASSIN’S CREED, and ALIEN: COVENANT.

OVERLORD is the wacky kind of genre-mashup that is dying in mainstream theaters. It’s the kind of thing that the every growing streaming bargain bin of Netflix would scoop up and let die in a digital grave, and if you want movies to be exciting and fresh again I’d say it’s your duty to attempt and make this drop into the weird, the wild, and the bloody.