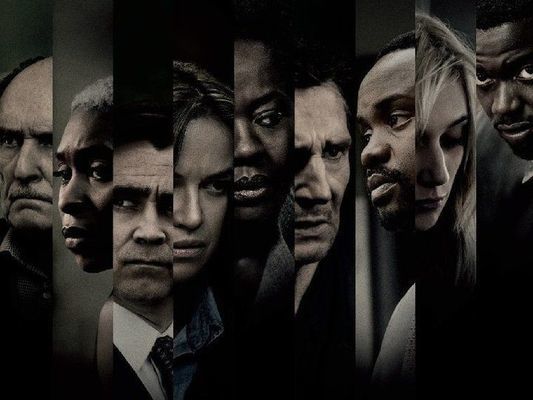 “The best thing we have going for us is being who we are...because no-one thinks we have the balls to pull this off.”

Steve McQueen's WIDOWS released this past weekend in theaters and sees four women coming together after their husbands are all murdered during a heist gone wrong, leaving behind a substantial debt owed to a ruthless criminal who will stop at nothing to get his money back, leaving these widows with no choice but to finish their husbands' final job.

Written by Gillian Flynn who penned the novel and screenplay for GONE GIRL several years ago, artist Steve McQueen tackles this femme-powered heist film like a more socially conscious and brooding Michael Mann, leaving audiences with a satisfying mixture of HEAT with something like OCEANS ELEVEN. The picture is star-studded to say the least, featuring Viola Davis, Michelle Rodriguez, Elizabeth Debicki, Carrie Coon, Colin Farrell, Robert Duvall, Bruan Tyree Henry, Cynthia Erivo, and Daniel Kaluuya.  Adapted from a 1980s British TV series of the same name, WIDOWS is obviously Americanized and tackles a slew of hot-button contemporary issues with varying degrees of success.

Steve McQueen, who has directed films like SHAME and 12 YEARS A SLAVE, is careful with his injection of racial issues and social woes to seemingly suggest that there is no real “right or wrong” anywhere, only circumstance and victims.   The film flat-out opens with criminal maestro Harry Rawlings (Liam Neeson) and matriarch Veronica Rawlings (Viola Davis) in bed together, passionately kissing amidst pure white sheets in a sleek Chicago penthouse.

This passionate exchange is intercut with a loud, violent, glimpse of Harry and his crew (Manuel Garcia-Rulfo, Jon Bernthal, Coburn Goss) attempting to escape the Chicago Police after their botched job goes completely up. Soon, the men find themselves meeting a catastrophic end and we return to Veronica, alone, in the same bed. Violence begets violence, McQueen seems to say, and his decision to cold open on such a deeply intimidate biracial kiss suggests that this violence runs deeper than skin color or, as we find, ethnicity.

The titular Widows all are varying degrees of societally beaten. Linda, played by a very emotionally heavy Michelle Rodriguez in her first substantial role since her debut in GIRL FIGHT, owns and operates a store for Quincenera dresses and décor, which is in the name of her criminal husband who has put the store up for collateral to support his gambling habits. Alice, played by fellow blockbuster alumni Elizabeth Debicki, is a Polish immigrant and is a victim of physical and emotional abuse from not only her husband, but her mother as well who encourages her to give online prostitution sites a try to earn money. Along for the ride too is the babysitter of Linda's children, Belle played by newcomer Cynthia Ervirom who is calculating, physically jacked, and comes from a busy apartment in the ghetto where she is employed partly at a hair salon.

Behind the scene of WIDOW's girl power team up is a race for the alderman of Chicago's 18th ward between black candidate Jamal Manning (Brian Tyree Henry) and white, Irish, son of the former alderman, Jack Mulligan (Colin Farrell). The ward, of course, is mostly ghetto and dilapidated structures that have been nothing but worsened by Mulligan Sr and his extensive experience with skimming money out of whatever funds he could, making sure to tell his son that he wouldn't lose to an “n-word”, no matter the cost. It turns out, of course, that the money Harry and his crew stole...was Manning's, to finance his campaign.

Manning plans to get even, and gives the Widows two weeks to pay him back the $2 million dollars.  This is where the rest of the complex racial examination comes from, as McQueen tackles the nepotism and seemingly hereditary racism of the Mulligans who are about as crooked as crooked politicans can get, but also the issue of black-on-black violence as Manning sends his brother (and enforcer) to brutalize anyone in his political path. This role goes to Daniel Kaluuya who is a man of very few words but of immeasurable violence.

I know you're thinking, “where's the excitement? Isn't this a crime movie?”. Well it's there, by God. While McQueen and screenwriter Flynn work tirelessly to craft a world of mutually assured misery with this bleak, nearly joyless rumination of racial, identity, gender, and class politics placing blame on all parties, there is also a grandiose sense of motion with McQueen's action. You wouldn't think a man who filmed a 2 hour spectacle of a businessman's crippling sex-addiction (SHAME) or a brutally graphic slavery torture piece (12 YEARS A SLAVE) would be up to doing shoot-outs, explosions, and car chases but McQueen does it with the flourish and grace of one of the greats.

The momentum propelling through the film's “big job” is nothing short of knee rattling, jaw-clenching, tension.   WIDOWS is likely going to be in the talks for some Oscars, so I would recommend not missing out. I'd say it has definitely earned a spot in my top 10 of the year, maybe top 5. It is a VERY good movie, but your mileage may vary depending on how willing you are to read into it beyond the surface.