Casey's has arrived in Blackwell 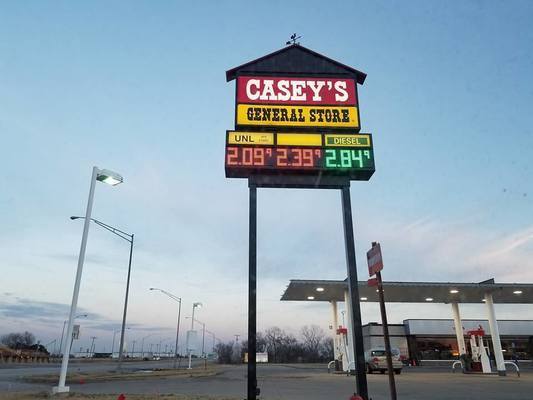 Bonnie Green, district manager for Casey's, greeted customers Friday afternoon as the convenience store’s managers served customers, trained employees, and oversaw the remodeling of the store, which is located at the intersection of State Highway 11 and 44th Street. The store was formerly a Domino gas station.

“We did the paperwork and signed everything, and Domino became ours on Tuesday afternoon, which is when the new signage went up on the street,” Green said. “We're in the middle of getting moved in right now but, of course, we are still dedicated to giving our customers the best possible experience that we can.”

According to Green, the remodeling will take “about four to six months.” However, she added, the store will be offering its signature products before the project is complete.

“We'll of course have our pizza and donuts in here very soon, and that will be leading towards the remodeling and expanding that we'll be doing to the kitchen area,” Green said.

The Iowa-based Casey's is known for its pizza, and the store’s online menu boasts of several variations of pizza, such as: taco, mac n' cheese, vegetable, BBQ beef, bacon-cheddar, and buffalo chicken.

Other items from the Casey's kitchen expected to show up soon in Blackwell include burritos, hamburgers, sub sandwiches, wraps, and salads. Breakfast items including hash browns, sandwiches, burritos, breakfast bowls, and biscuits and gravy will also be offered.

Casey's, like Domino, will be open 24/7. All of the Domino employees were brought over by Casey's as well, said Green, who also noted that the store plans to hire for more new positions soon.

“We're going to be providing the same service and care that people familiar with Casey's expect, and we will be stocking these shelves with some new items as well,” Green said.

Casey’s new location near I-35 won’t be the only Casey’s in town. Casey’s has also purchased the former Sonny Cannon automotive dealership on East Doolin Avenue, and construction work is expected to begin there soon. The Doolin location is marked as “opening soon” on Casey's official website.

The Casey’s chain of convenience stores began in 1959 in Des Moines, Iowa. It now has over 2,000 locations throughout the Midwest.