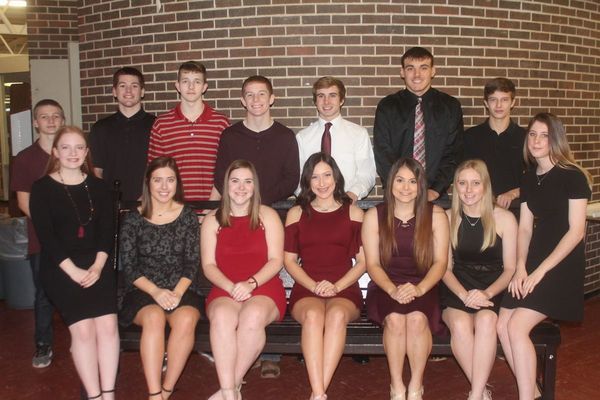 Wrestling Coronation will be held at on Thursday, January 10 between the middle school and high school duals. The Maroons will be hosting the Guthrie BlueJays.

The Blackwell Maroons wrestling team got back into action last week after the holiday break with a dual meet loss to Stillwater 54-24 and then a trip to Cushing for the Tiger Invitational were the Maroons finished in ninth place out of 29 teams with 89.5 points. Perry won the tournament with 209 points.

The Maroons were led by senior Drake Barbee with a second-place finish in Cushing at 195 pounds. Barbee lost his first match of the season on a 7-2 decision in the finals to Cushing’s Eriq Simpson. Barbee made it to the finals with a 34-second fall over Kyron Woodall of Sperry, a 16-0 tech fall over Colton Howard of Bridge Creek in 3:40 and a fall over Robert Wolfkamp of Belton, Missouri in 3:56. Barbee is now 15-1 for the season.

The Maroons got fourth place finished from Tanner Botts at 132 pounds and Karston Loveall at 152 pounds along with a sixth-place finish from Caleb O’Dell at 113 pounds.

Botts (13-6) defeated Salisaw’s Dathan Leach with a 5:38 fall and then beat Trevor Stringer of Perry 17-15 in a sudden victory match to get to the semi-finals. Collinsville’s Caleb Tanner won that match on a tech fall 16-1 in 4:55. Botts bounced back in the consolation semi-finals with a fall over Cooper Stone of Miami in 4:06. Bridge Creek’s Colton Smith then pinned Botts at the 1:17 mark of the third-place match.

Loveall (9-7) got a first round bye and then pinned Fort Gibson’s Deven Woodworth in 1:23 in the second round. Kane Bowman of Wagoner then pinned Loveall at the 4:59 mark in the semi-finals to push him into the consolation round. Loveall would pin Daelin Stacy of Mangum in 2:30 and score decisions over Trey Hudgens of Sallisaw and Abel Perez of Catoosa to advance to the third -place final. Brier Smith of Sallisaw would eventual pin Loveall at the 5:41 mark of the match.

Caleb O’Dell (12-7) went 2-3 at Cushing to claim the sixth -place spot out of 15 wrestlers. O’Dell started strong with a fall and a decision to get to the semi-finals but got pinned by Ryan Smith of Perry in the semi-finals and then dropped his two consolation matches on Saturday.

Mikey Riley (160 pounds) went 2-2 in Cushing with a 1:46 fall over Collinsville’s Hayden Knight in the first round only to drop an 11-3 decision to Brody Harbour of Perry in the quarterfinals. Riley bounced back in the consolation round with a win but was then eliminated in the consolation quarterfinals on a 10-2 decision to Keedin Crockett of Miami.

Caleb O’Dell went 1-2 at 106 pounds with the win being over teammate Evin Simpson in the consolation round. Simpson went 1-2 on the weekend with a fall over Newkirk’s Dawson Guidry in 3:22 being his lone win.

Christian Mora (145 pounds) opened the weekend with a 14-11 decision over Bryar Lucas of Cleveland, but then lost on a tech fall 19-2 to Kolby DePron of Bridge Creek to fall into the consolation round. Mora was then eliminated by Collinsville’s Wyatt Hartley on a fall at the 3:41 mark of their match.

Trey Peetom (138 pounds) went 1-2 on the weekend to fall to 7-8 on the year. Todd Grey (220 pounds) went 1-2 with a pin over Newkirk’s Stormy Mann to start the tournament but two quick losses eliminated Grey from any more action.

The Maroons will be in action tomorrow night as Class 5A Guthrie comes to the BHS gym for a dual meet.

Blackwell to host 3A wrestling regionals in Feb...

Cody's Corner: Join us for a Blackwell revival

Newkirk's "Walk of Warriors" coming in the fall

The City of Blackwell's wastewater plant gets c...