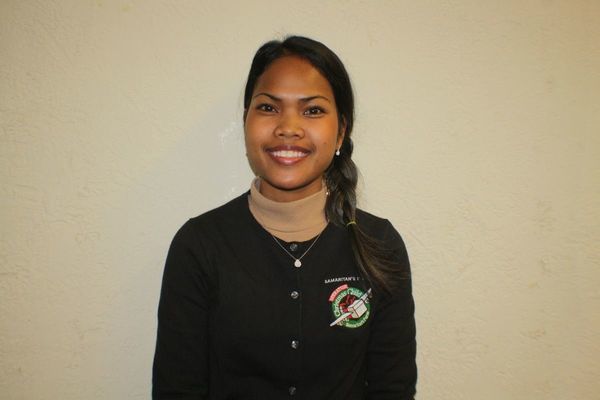 If you saw Boun today, you would think she had been going to church for her entire life.

But she didn't know God until she was 14 years old.

Growing up in Battambang, Cambodia made life hard for Mrs. Thorne.

“My parents were unable to get an education because the government killed all educated people,” Thorne said. “Because of that, it led our family to live in a very poor way.”

Though her family was large, its income was small. Her father was a fisherman, and her mother was unable to work: she had to care for Thorne and her eight siblings.

The family lived on a small, floating house-boat. The children slept on the floor. Most mornings, Thorne got up at 2 a.m. to help her father fish.

“Because we were so poor, we could not buy food from the market,” she said. “So, we had to eat whatever we could get from the water and the trees. We were growing up eating monkeys, turtles, snakes, the rats, the birds … anything that we could catch.”

The family lived on the water, where there were no schools and no hospitals. But when Thorne fell ill at the age of six, her father's solution wasn't to find a hospital: it was to let her die.

“One day, when I was around six or seven years old, I got sick. But because there was no hospital, my mom started to worry about me and told my dad to bring me to the hospital. But, because we were so poor, he just said, 'Just let her die.'

“So when I heard that,” she said, “I told myself I wanted to go to school and be a nurse.”

It was that experience that motived Thorne to get an education. But doing so would be made harder by her father.

Thorne's father said his daughter “didn't need an education to live.” By marrying a woman and having children without ever having been to school, he thought obtaining an education was worthless. And if Thorne wanted an education, he said, she would have to leave the family.

At the age of 7, the young girl was sent to live with her aunt. Every morning, Thorne baked cookies to sell. Though she was able to go to school while living with her aunt, she had to focus on selling cookies – each and every day.

“If I didn't sell all of the cookies, my aunt wouldn't feed me,” she said.

Thorne enjoyed school, but she began to miss her family: with them, she was always guaranteed a meal. After living with her aunt for three years, she set out for home. But in the time she was gone, things didn't change. She still felt unloved by her father.

After her difficult childhood, Thorne was sent to live at the Rapha House in Battambang, a home for impoverished girls. She lived there from 2006 to 2012, and she was taught to be an accountant.

Just like she wanted, Thorne was finally obtaining an education. But she also began to learn other things.

“When I got into the Rapha House, I had a counselor who would come to me and tell me about God, about God's love. One thing she told me is to love and forgive the people who hurt me,” Thorne said. “But it was really hard for me to understand because my dad and uncle were supposed to love me, but they didn't love me, and then the counselor told me to love them while they hurt me. I didn't understand that.”

Though it was a hard lesson to grasp, Thorne began attending a Christian church at the Rapha House. But because her family was Buddhist, she had never celebrated Christmas. And she had never had a birthday.

But one day, Christmas finally came.

“One day, they had a Bible study program, and at the end of the Bible study, they gave us a gift,” she said. “At that time, I was about 14 years old, and that was the first gift I ever got.”

That gift was a shoebox.

The shoebox, painted red and green, was filled with toiletries, clothes, and toys. Millions of the boxes were delivered as part of Operation Christmas Child, sponsored by Samaritan's Purse. The organization was founded in 1970 by minister Bob Pierce as a worldwide Christian humanitarian organization that works to provide aide to children in need across the globe.

For Thorne, receiving that gift was a real treat. But she wondered where it came from.

“When I opened my box,” she said, “the first thing I saw was a new pair of flip-flops. We were only allowed one pair per year, so I was so happy. While I' m going through all the stuff in my shoe-box, I wondered, 'Who sent me that gift?' They don't know me.”

Then, she had an epiphany.

“I remember,” she said, “that the teacher told me that people in America loved God and they wanted to bless me with that shoe-box. I started to realize that God's love is so true and so real because He can make somebody that doesn't even know me, love me and send me the gift.”

Receiving that gift did more than make Thorne feel loved. It inspired her to become involved with mission work herself. Luckily for her, there was a woman at the Rapha House who could help her reach that goal.

A nurse practitioner working with the Rapha House Miracle Team had stopped at the location in Cambodia to wait on her nephew, David, to renew his visa so he could perform mission work in Thailand. David flew to Cambodia to see his aunt – and Thorne was the translator for David’s aunt.

Boun fell in love with David, and the couple were married in April of 2016. But it was in January of that year when they left Cambodia and flew halfway across the world: to the United States of America.

The couple landed in the Dallas-Forth Worth airport one January night, trekking to Oklahoma the next day. That October, they made their home in Blackwell, where David found a job with Vestas.

The couple started attending the First Baptist Church in Blackwell. And when they walked in the door, Thorne was shocked: the church members were packing shoeboxes for Samaritan's Purse.

“When I saw the box, I told a lady, 'I remember that I got this box when I was 14.' And then that's when I started to realize that my shoebox wasn't from the rich people in America, it's actually from the church, who loves God and wants to bless the children,” she said.

After Thorne told her story at the church, word spread to the upper echelons of Samaritan's Purse. Soon after, she received a call from the organization's leaders, asking her to become a spokesperson. As a spokesperson, she visits churches in Oklahoma and Kansas, sharing the story of what the shoebox means to her.

It’s a story that she hopes will inspire people to continue filling shoeboxes to give to children around the world. To her, that’s her calling.

“Sometimes, they probably wonder if the gift that they send really gets into the hands of the children. For me to be the one to receive the gift, it's kind of like an answer to their question. When I received a box, and I never knew who packed the box, and then I come here and meet the people who work so hard to pack all the boxes … it's an amazing feeling. I don't have money, but I have a story that God gave me. Maybe that is something I can do for God's kingdom,” she said. “I want to do something for Him.”

While mission work is her calling, Thorne still wants to live out her childhood dream: becoming a nurse.

Thorne is currently a student at Northern Oklahoma College in Tonkawa, where she is earning her associate's degree. Her next goal is to enter the school's nursing program. As a nurse, she wants to deliver babies because she “loves working with children.”

Since English is not her primary language, school is sometimes difficult. So is understanding what her preacher is saying.

But even when life is tough, she knows it's all a part of God's plan for her – a plan that started with a shoebox.

“Looking back on the first day of my life, without God, I don't think I would be here today,” she said. “I think that, in every situation that happened to me, He was always there for me. The shoebox, to me, is not just a gift, but is a box of love and hope. It's the same to the children around the world. It helps to remind them that they are loved. I don't know who packed that box [for me]. Maybe one day in heaven, I will know.”