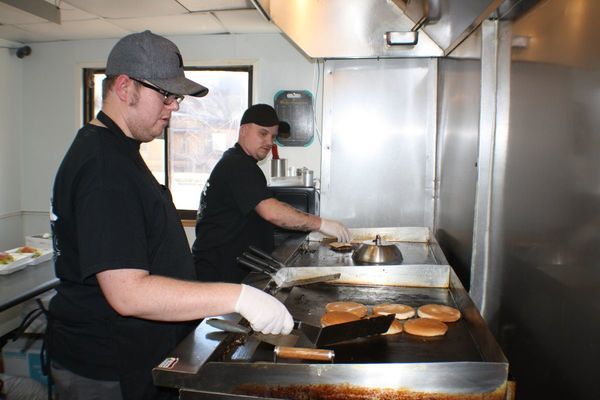 A first-time business owner is giving a second chance at life to a local restaurant that closed last year after being open for only four months.

Blackwell resident Kevin Smith is putting local food-eaters back in the saddle at The Iron Horse Restaurant, a motorcycle-themed burger joint that was firing on both cylinders until it closed in November.

Smith made his foray into the food business in December, when he saw a “For Rent” sign posted in the window of the then-vacant restaurant.

“I had been a slot-machine repairman, and I thought I wanted to try working somewhere local instead,” he said. “This is my first business.”

Smith reopened the restaurant on Friday with a new menu, new prices, and new staff members. According to Smith, that's what it takes to run a good restaurant.

Along with changes in service, Smith said customers will notice significant changes to the menu – and the food served.

“The burgers are cooked fresh, not frozen,” he said. “We've got $5.99 cheeseburger combos, and it's a big burger. We also offer all-day breakfast, and we will be adding items to the dinner menu in the future.”

Smith said the restaurant currently has an “expanded breakfast menu,” with one item on the bigger menu being designed for those with bigger appetites: the MOAB Challenge.

“This is the Mother of All Breakfasts Challenge,” Smith said. “If you can eat it in one hour, you get a free T-shirt and the meal paid for.”

The challenge was inspired by “Man vs. Food,” one of Smith's favorite cooking-themed TV shows.

In the future, Smith plans to do some remodeling work at the motorcycle-themed establishment, but he will keep with the current theme. He plans to place a restored 1956 Indian motorcycle on a table in the restaurant, and he also plans to install a 25-foot iron sculpture of a horse in the parking lot. But for now, he says, he's just focused on getting the restaurant up and running once again.