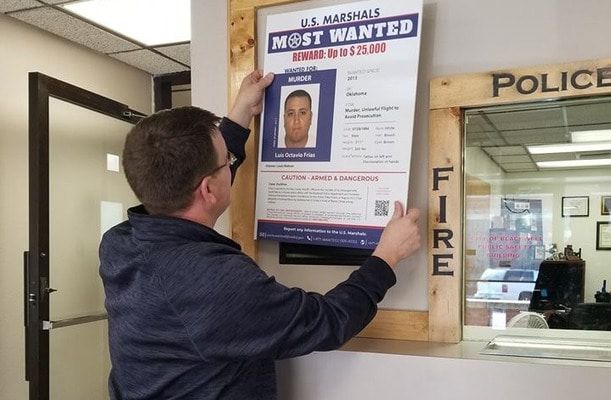 The United States Marshals issued a release this afternoon after news broke that Luis Frias, wanted in connection to the 2013 murder for former Blackwell Police Officer Janett Reyna, was apprehended just a month after appearing on national television.

“The arrest of Luis Octavio Frias allows a wounded community to start healing and stands as a testament to the crucial role the public plays in helping us locate and arrest dangerous fugitives,” said U.S. Marshals Service Acting Deputy Director David Anderson. “We especially thank John Walsh and his team for their commitment to law enforcement and for featuring Frias on his show.”

The fugitive investigation for Frias gained momentum when an anonymous tipster contacted the U.S. Marshals after watching the fugitive’s profile on the television show. The information provided allowed investigators to develop substantial information about his possible whereabouts in Mexico. The U.S. Marshals’ Mexico Foreign Field Office worked closely with Mexican authorities, who were able to narrow the location to a suburb of the city of Guadalajara in Jalisco.

“With the help of our federal, state, local and international partners, Frias’ arrest sends a strong, clear message to anyone attempting to flee the country to avoid prosecution that justice has no boundaries.”

When Frias arrived back on U.S. soil Thursday, U.S. Marshals used the same handcuffs issued to Reyna by the Blackwell Police Department to take the fugitive into custody.

A full story featuring an interview with Chief of Police Dewayne Wood will be available in next week's February 13 issue of the BJ-T.