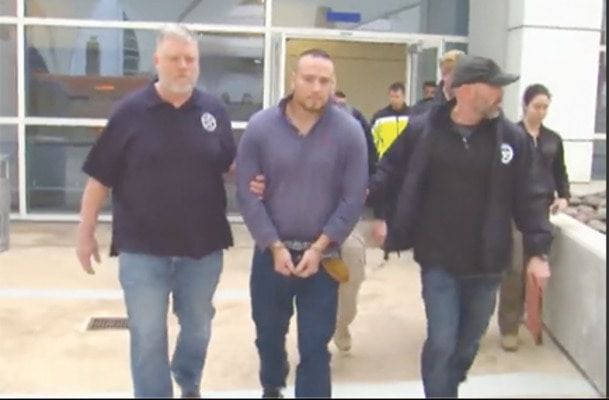 Five years of waiting has come to an end for Blackwell law enforcement. Luis Octavio Frias, a former Blackwell resident who allegedly stabbed his wife to death in 2013, was apprehended by the U.S. Marshal's Service last week after the case was featured on international television, bringing to an end a five-year binational manhunt.

Frias was captured in Mexico and extradited to the United States. He was taken into United States custody at the Dallas-Fort Worth International Airport on Thursday, February 7.

In August 2013, Frias allegedly stabbed his wife, former Blackwell Police Officer Janett Reyna, 41 times in front of their young children. Reyna died as a result of her injuries. That summer ended with an extensive manhunt for Frias, who was wanted as a suspect in her murder.

In 2014, authorities believed Frias had escaped to Mexico.

Heading into the summer of 2018, almost five years after Reyna's murder, Blackwell Chief of Police Dewayne Wood was contacted by Zero Point Zero Productions, the team behind Investigation Discovery's new crime show, “In Pursuit with John Walsh.” Producers were interested in featuring the cold-case in the show's first episode.

In January of 2019, the TV episode featuring Frias was released in the United States. The show generated multiple tips related to Frias' whereabouts, producers say. But it was the show's international premiere that investigators say led to Frias' capture.

After the show's international premiere, a tip was generated from a viewer in Guadalajara, Mexico, where the episode aired at the end of January. The tipster called into the show's hotline with information regarding Frias' possible location.

According to a press release sent by the United States Department of Justice, the U.S. Marshal's Mexico Foreign Field Office “worked closely with Mexican authorities” to narrow down Frias' location. He was found in the Guadalajara suburb of Jalisco, where he was detained by Mexican authorities.

Frias was extradited to the United States, where he was placed under arrest by the U.S. Marshals in Texas. He was brought into the country at the Dallas airport. Marshals used the set of handcuffs issued to Reyna by the Blackwell Police Department to take him into custody. He was then transported in shackles to the Oklahoma County Courthouse.

U.S Marshal Johnny Lee Kuhlman spoke about Frias' arrest in a press release, saying: “In so many ways, those handcuffs represented poetic justice not only for the victim, but for her children, her brothers and sisters in blue, and her community.”

Blackwell Chief of Police Dewayne Wood was called by the Marshal's Service upon Frias' arrest, and he described the phone call as an “emotional moment.”

“I'll never forget that,” Wood said. “I was up here in my office and received a call from Buck Stevenson, who had been assigned the Frias case. He called and said, 'We got him.' It was such an emotional moment for me that I asked for him to call me back after I could collect myself.”

Friday afternoon at the Federal Courthouse, Wood was joined by Kuhlman, Kay County District Attorney Brian Hermanson, and several other law enforcement agents from the state and federal government at a press conference to discuss the capture of Frias. The press conference took place shortly before Frias went into his first federal hearing that afternoon.

“Investigation Discovery started airing John Walsh’s new show in Mexico on January 30,” Kuhlman said during the press conference. “The next day, a viewer in Guadalajara, Mexico sent in a very detailed tip, and we immediately started to work on it. That’s where the beauty and strength of the U.S. Marshal’s Service was displayed. We knew Mr. Frias had some family living in that area, so our metro fugitive task force had already involved our Mexican investigative liaison that works out of Arizona for the Marshal's Service.”

Kuhlman said Frias had assumed a new identity, gotten a job, and formed a new lifestyle in Mexico.

Hermanson thanked those who helped bring Frias back to the U.S.

“Obviously, after five years, it was somewhat frustrating that Mr. Frias was not in custody,” Hermanson stated during the conference. “And now, we thank all the good work those people have done. … We can at least move forward with this.”

In federal court on Friday, the the federal government dismissed an immigration charge against Frias so that the Blackwell Police Department could move him to Kay County to stand for trial.

Frias was escorted to Kay County in shackles by armed U.S. Marshals. He stated in court that he “feared for his life” while in the custody of Blackwell Police Department, stating that “almost everyone has worked with my ex-wife.”

The judge overseeing Frias' case denied his request to remain in federal custody. By 5 p.m. Friday, Frias had been booked into the Kay County Detention Center in Newkirk.

“He was quiet,” Wood said on transporting Frias. “He didn't have a lot to say.”

Wood added that Frias is still presumed innocent until proven guilty. He also said Frias' arrest is a “sigh of relief” for those involved.

“This has been such a big sigh of relief for not just me, but Reyna's friends and family. It has also been a relief for our officers and first responders who worked the scene that day in 2013, and for everyone else. This is a moment of closure for our community that was ripped apart. Now, we can close that chapter, five years later, and open a new one. It is a chapter of healing and, eventually, finality as he's taken to court,” Wood said.

Frias is scheduled to appear before a judge at the Kay County Courthouse for his initial appearance at 9 a.m. Friday, February 15.