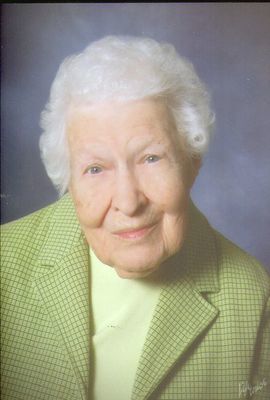 Helen Seubert, an award-winning journalist whose career spanned decades and saw her hold a variety of notable editorships, has died. She was 100.

Helen passed away the day after her 100th birthday last week. A longtime editor at the J-T, she was known not only as an important community figure, but also as a pioneer of what we in the news business now call community journalism.

During her time at the J-T, Helen covered a little bit of everything. Most notably, she was known as the society editor, compiling unique stories about people in our community and the interesting things they did to help better our town. She also helped advance the rights of women as the J-T’s women’s editor, where she featured impactful women in our community.

I never personally knew Helen. But in my almost two years at the J-T, I’ve never stopped learning about the incredible work she did.

My good buddy Dayle McGaha, who was publisher of the Journal-Tribune for two decades, has the fondest memories of Helen. They worked together for years, producing a paper that won the highly-coveted Sequoyah Award. Helen even outlasted Dayle at the J-T: he retired in 2000, but she made it another few years there.

Earlier this year, I brought Dayle out of retirement and had him start writing a column for this opinion page. This week, he has a tribute to Helen, and it is one of the most heartfelt tributes I have ever read. In his column, Dayle reflects on the passion Helen had for her job: bettering her community through journalism.

In this day and age, we should look to the strong, bold women like Helen in that field.

When you turn on the news in the evenings, you’ll often see news about the news industry itself. Media outlets of all kinds are constantly coming under fire for political bias. Conservatives attack outlets like The New York Times for being too liberal, while liberals attack Breitbart News for being too conservative.

To that end, news outlets accuse each other of being biased, too.

The constant accusations of “fake news” create problems for people looking to pick out a credible source of information. But journalists like Helen Seubert are the solution.

Helen embodied all the things a good journalist should be, and perhaps the most important quality was a desire to be involved in her community.

Helen lived in Blackwell. She had her family here. She worked her, shopped here, dined here, and went to church here. Her whole world was in this community, and as such, she sought to make it better.

As a journalist, Helen was afforded a unique opportunity to do that. She was able to report on important events that would determine our city’s future, and she was able to hold to account those who held power in this city.

And let me tell you, she was. I’ve never heard a bad thing about her, and I never will.

Helen did her best to improve our community though trustworthy journalism. Because of that, she is a role-model for every single one of us at the J-T. We all love our community, and we will never stop in our efforts to make it the best it can be.

As a journalist, I am thankful to have people like Helen to look up to. All of us are.

Helen Seubert will go down in history as a journalist who told the truth because she was always honest about her goal: to make her community a better place. We need more journalists like Helen Seubert.