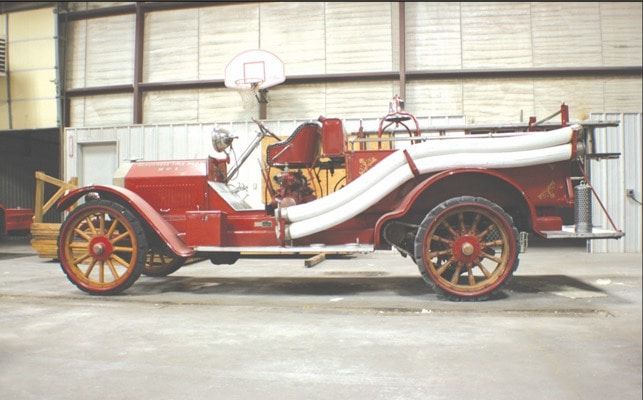 According to Jim Backus, a retired Blackwell firefighter, the city purchased Engine No. 1 from the American LaFrance company in 1918. An exact model for the truck could not be determined. The truck was bought new from the company, which is one of the largest manufacturers of fire engines in the United States.

The truck replaced the city's horse-drawn fire equipment, which had been used by the city since the fire department was established after the opening of the Cherokee Strip in 1893. Firefighters believe it may have also been one of the first motorized fire engines in the state of Oklahoma.

Backus said the city used the truck from 1918 until it was taken out of service in the 1930s. After it was taken out of service, it stayed around the fire department for a little while before being given to the Elks Lodge. Lodge members used the truck in various parades for several years. But in 2000, the lodge donated the truck back to the city through the Blackwell Fire Department Association. Firefighters then set out to restore it.

“Once we got it back, we got it running again. We tuned up the motor and worked on the wheels. We spent days sanding the wheels back down to wood. The wheels were painted, but we thought they looked better as wood. We then came to find out that they were painted from the factory,” Backus laughed.

The truck's 6-cylinder gas engine still runs, and so does the truck's water pump. Firefighters say the only problem the truck has is that the updraft carburetor leaks, but that parts for it are hard to come by. The truck has a hand-crank for a starter, which can be difficult to use.

“It was fun to drive if you were man enough to get it started,” Backus joked. “It was a beast.”

Shortly after restoring the truck, firefighters took it to a fire-engine show in Enid. Last year, they took the truck to another show in Stroud. Other than possibly taking the truck to an occasional event, however, Backus said he does not believe there are any future plans for the truck.

The engine, along with several other important fire-fighting vehicles, is currently being stores in a the building formerly occupied by G&C Concrete. The building is located on 29th Street in Blackwell.