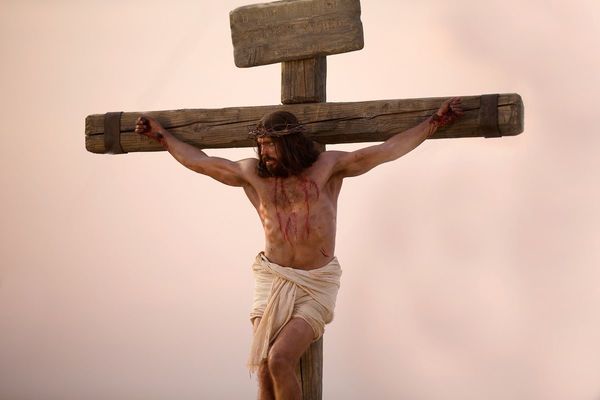 Before, I have spoken about the damage of the Roman punishment of being whipped 39 times. Remember, many people who were whipped would not have survived very long afterwards, and the fact that the Romans both whipped Jesus and then crucified him tells us something.

To have been whipped was common enough, but to have been whipped and crucified was reserved more for those that the Roman authorities wanted to truly make a point with. But let us not forget that crucifixion was a Roman form of punishment that they had been perfecting almost 500 years before Jesus’ crucifixion.

We have all seen pictures, movies, and paintings of Jesus’ death on the cross. But how many of you have ever understood what was physically going on on the cross?

This was the ultimate death penalty of the Romans. It was designed for maximum pain and humiliation. There is a very good chance that Jesus was naked, or at least stripped down to what we would call his undergarments, but most likely naked. Think about the physical placement of his arms and legs. There is no way of hiding the nakedness, and one can assume that participants and the spectators would be yelling insults and crude remarks at the victims and making fun of their manhood and such.

Now, let us get to the physical aspects of being crucified. From my reading, Romans used seven-inch nails for both the hands and feet. The nails would sever the median nerve, making the pain lever excruciating. As a matter of fact, the word excruciating comes from the Latin world excruciare, and it was a Roman word meaning “as painful as a crucifixion or from/out of the cross.” The pain derived from crucifixion was so intense that the Romans had to create a new word for it, and that word is the root of excruciating.

But, it wasn’t just the pain from the nails driven into your flesh, but also the positioning of the knees at a 45-degree angle. With your body weight all upon your arms and legs in that position, it was relatively easy to breathe in. But, in order for you to breathe out, you would have to use your legs to push up against those nails to take the pressure off of your chest to be able to exhale. Think about doing partial squats every few seconds. How long do you think your legs would have the strength to go? Not long. You would also use your arms to help pull up, but that meant pulling against those nails. Besides, your hands would have been paralyzed once that median nerve had been severed.

So, imagine if you will: You have been nailed to the cross, naked. When they drove the nails into you, they severed that nerve, making your hands paralyzed and that excruciating pain. Once your cross was lifted up, gravity would put a good chunk of your weight on your chest, and in order to breathe out, you had to push with your legs and/or pull with your arms. Each time you did this, not only did your muscles become weaker, but in time, when you could no longer keep most of your body weight up, your knees, elbows, and wrists would eventually be pulled out of their sockets. And on top of all of that, you most likely had a bowl movement on that cross and loss of bladder control. Just more humiliation added to this experience. Excruciation somehow doesn’t quite work anymore, does it?

Back to Jesus. He had all of this done to him after he had been flogged. Sure, the flogging would bring death quicker to him on the cross, but imagine trying to raise your body up after that kind of flogging.

And he could have walked away from all of this the day before, but he didn’t. Why? Again, go look in the mirror and you will see the reason why Jesus didn’t walk away. You will see looking back to you the passion of Christ.