"Game of Thrones" returns with a Mad Queen 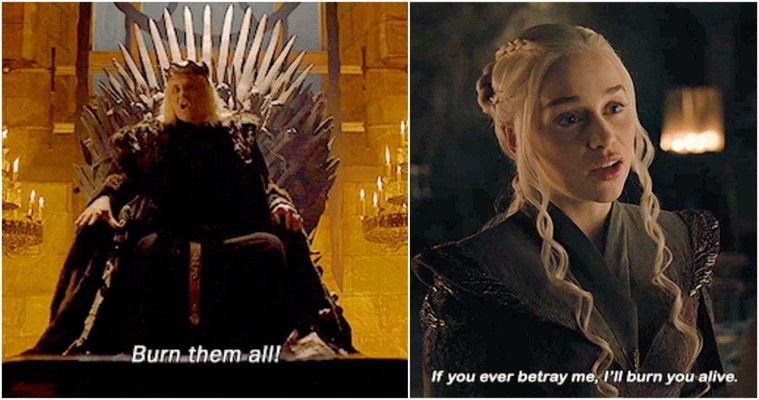 The final season of HBO’s acclaimed fantasy series GAME OF THRONES premiered this past Sunday night with a short but effective episode that served as a way to ease fans into the final 6-episode stretch of this 8 season drama. If you have not seen it and don’t wish to be spoiled, I urge the whopping 4 people that read this column to exit now.

The episode began with a re-jigged intro sequence which discards the Season 1-7 opening showcasing the mighty houses and locations of Westeros for an ominous snow-covered tundra merely populated by Winterfell, King’s Landing, and the ruined Wall. “This is where the action is,” the show says, “nothing else matters.” To quote Dr. Strange from last year’s INFINITY WAR, “We’re in the endgame now.”

So last season ended with the “shocking” reveal that Jon Snow is actually Aegon Targaryen, son of Lyanna Stark and Rhaegar Targaryen..nephew of Daenerys Targaryen, whom Jon had intercourse with in Season 7’s final climactic (heh) moments. So, Jon is in love with (?) his aunt and she really is keen on him as well, but they don’t know the secret yet...but everyone else seems to.

We see Dany, Jon, and their band of misfits including Davos, Varys, Tyrion, Barack Obama, and Girl from Fast & Furious 7 all riding into Winterfell where we get to watch Dany interact with Arya and Sansa Stark as well as a long-awaited reunion between Jon and his “siblings”, it’s all touching until Dany gets upset that everyone doesn’t immediately get down on their knees and start to kiss her feet. Especially Sansa, who has lived through Joffrey Baratheon and Ramsay Bolton, giving her a good sense of a homicidal dictator when she sees one...and it appears the Mother of Dragons gives off a psycho alarm. Shocking.

Adding to that, Dany and Ser Jorah meet Samwell Tarley, Jon’s best friend and the man responsible for saving Jorah a few seasons ago, curing him of Greyscale in one of the weirdest ass-pulls the series has done so far, but I digress.

Last season, audiences were shown in the form of a pseudo Rorschach test glimpses of Daenerys going “Targ-mad” as it is referred to in George R.R. Martin’s novels the series is based on. It is said that when a Targaryen is born (a deeply, richly incestuous family) the Gods flip a coin to determine if they will be psychopathic or malevolent. One of these instances came after Daenerys and her dragons burned an entire caravan of supplies that were supposed to help those afflicted by the war. After she murdered and roasted alive hundreds of Lannister men (her Dothraki horde picked a good number apart as well) she took Samwell’s father and brother captive. Offering them to accept her as Queen or die. They chose death...despite Tyrion’s urges to her that they didn’t have to be killed. Dany burnt them alive.

Cut back to this latest episode, Dany hears Samwell’s surname and is almost giddy, like it’s a joke. “Like, not those Tarlys I burned to a crisp right?” she basically asks. Samwell takes his leave, and you can see that he knows what’s happening. He finds Jon to tell him the truth of his parentage, and the two discuss how Dany will react. Hint: she wont react well.

My friend and I, since reading the as-of-yet-unfinished book series, have often followed the popular theory that Dany was going to end up as the series’ antagonist (behind the Night King of course), and with the success of her character and general wimpiness of showrunners David Benioff and D.B. Weiss, we figured they would morally white wash Dany...but that may not be the case. Especially as the episodes continue, and she becomes more and more difficult to relate to because she’s plainly a psychopath.

The white walkers are coming, and Jaime Lannister has arrived in Winterfell ahead of soldiers Cersei Lannister is “allegedly” sending to help the northern forces in a tepid truce. There are 5 episodes remaining, and it quite literally is anybody’s game now. GAME OF THRONES airs Sundays on HBO.

Also, Star Wars Episode 9 is called “Rise of Skywalker”, I know, but I don’t have room to talk about that now! For the next few weeks this is GoT territory.