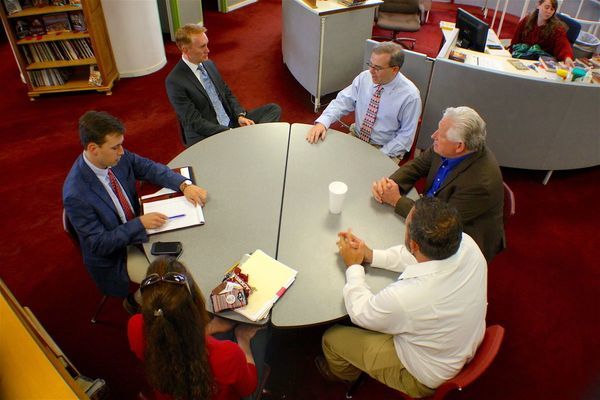 U.S. Senator James Lankford visited Blackwell High School on Monday to speak with school administrators about federal education policy and to talk with students about his work as one of Oklahoma's members of the U.S. Congress.

Lankford arrived at BHS at 1:30 p.m and was greeted by Blackwell Public Schools Superintendent Rick Riggs, BHS Principal Shawn Haskins, BHS Assistant Principal EJ Edgar, and BPS Special Education Director Bobbi Tripp. After shaking hands with the senator, the group toured the classroom of Coleen Blevins before heading to the school library for a closed-door meeting.

Haskins said that the subject of the meeting, which has been in the works for over a year, was federal student testing.

“We talked about state testing that is federally mandated, mainly for kids on individualized education plans taking the ACT test,” Haskins said. “By law, they have to, which I disagree with. We also talked about some federal reports that we are required to do that I feel like are nonsense. We talked about increasing funding and support for English language learners. It was a good, good meeting.”

Haskins commented after the meeting that he appreciated Lankford's visit and said that the senator was a “good guy.”

“He was on board with us, and he totally got everything we talked about,” Haskins said. “I like him, I don't think he's a counterfeit politician. He's up there for us. He's going to get back with us on some other things, and he said he meets at least every month with [Betsy] DeVos.”

DeVos is the director of the U.S. Department of Education.

Following Lankford's meeting with school administrators, he was joined by about 20 high school seniors for an hour-long discussion on Washington politics. High school seniors asked the junior senator questions about his stance on immigration reform, trade policy, prescription drug prices, and even his Christian faith, among other hot-button issues in the national spotlight.

Lankford walked around the room to shake hands with the students as soon as he entered the room. He introduced himself not as Senator Lankford, but simply as “James.”

After meeting students, Lankford first gave an overview of his position as a federal senator and how he came to obtain his seat as a junior member in the upper house of Congress.

Lankford then let students take the floor to ask questions. The senator was first asked how he made his entrance into politics, which he said his wife calls “life's greatest interruption.”

Before becoming a member of Congress, Lankford served as the director of a popular church camp in southern Oklahoma for 13 years. Lankford had never before been in politics, including student government. But he said a call from God led him to the U.S. Capitol. Despite his change in occupation, he says he is still the same person he has always been.

“[My wife and I] really felt called to do this. As much as we felt called to go into youth ministry, we felt called to be able to go into politics. It was a total life shift for us,” he said. “I, quite frankly, still do ministry. I'm still the same person I always have been. That hasn't changed. My ministry is in D.C. now rather than Oklahoma. I hold a Bible study in my office where other senators come and join, and we talk about scripture together. … I still have lots of conversation about my faith, the same as I always have.”

After discussing his faith, Lankford was asked about President Donald Trump's decision “about building the wall” at the southern border between the United States and Mexico. Lankford responded that national debate over construction of a border wall, a major portion of Trump's 2016 presidential agenda, had drifted away from facts.

“The whole wall/fence thing is way over politicized. Quite frankly, the areas that he wants to build fencing in are probably pretty good areas to build fencing. … There's already fencing on 650 miles. What's interesting is that the last four presidents have all built fence on our southern border. … But suddenly, it's a hot topic because Trump does,” Lankford said.

According to Lankford, Trump wants to repair dilapidated portions of the 650-mile-long barrier and add another 100 miles of barriers in the areas with the highest levels of drug trafficking.

“About 40 percent of the illegal drugs that come between Mexico and the United States come in the same 100-mile area, and so he wants to be able to put fencing in that area to basically, if you're going to do drug trafficking, force it to another area, where they can enforce it with people better. It's more political than it should be when you actually look at the facts on it,” Lankford said.

Following student questions, Lankford posed for photos with students and school employees before leaving for an event that night in Oklahoma City.

Lankford will be in Oklahoma for two weeks to hold Town Hall-style meetings across the state before returning to Washington. His stop in Blackwell was one of the first on his statewide excursion.