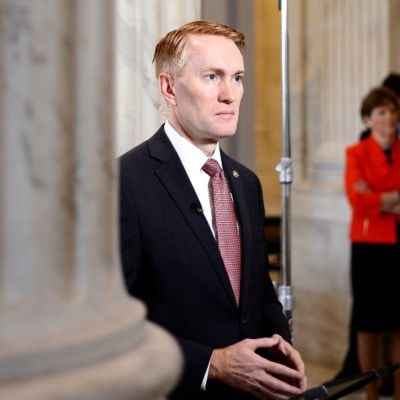 U.S. Senator James Lankford began a statewide two-week tour on Monday to meet with his constituents back here in the great state of Oklahoma. I caught with Senator Lankford when he stopped at Blackwell High School on Monday so that I could ask him about his stances on some of our nation's top issues, including government spending, immigration reform, and prescription drug costs. Here's what we discussed.

Q: Thank you for your time, Senator Lankford. Each year, you release a report called “Federal Fumbles” that details what you determine to be wasteful spending in the U.S. government. Tell me about your latest edition.

A: “Federal Fumbles” is the name of my report, and we put it out every year. We try to articulate, “Here are some areas where the government could do better at.” It's not an exhaustive list trying to solve every area of government inefficiency. It has some big “themes” that we try to focus on and say, “Here's some areas where we're really messing up,” and we propose a solution to every one of them. We don't raise a problem without also raising a way to answer it as well.

Q: What is the biggest problem you have found in your most recent report?

A: We've done four of them so far. The biggest problem … would be the way we do budgeting. Since 1974, we've done budgeting the same way, and it's only worked four times since 1974. We propose, “Here's a better way to do budgeting” so that we can start attacking our debt and deficit.

Q: What parts of President Trump's agenda do you support, and what parts do you not?

A: Wow, that's a tough one. The hard part is trying to determine what, in the public eye, supporting the president looks like and what part is actually his agenda on it. I am very supportive of what we are tying to do on the border because we have got to be able to find a way to manage immigration. We've got to be able to deal with the trade issues. This has been a really big issue that we've not resolved for a very long time as a nation. I'm also very supportive of our tax policy and our regulatory changes. We should have fair, even regulations and not over-regulate companies. Areas I don't support … We need to be more attentive to how we're dealing with debt and deficit. There are some of the ways the president has tried to cut the debt and deficit that I think, long-term, aren't going to work. Tariffs are something that should go away, and the president has stated that he wants no tariffs or low tariffs. That's the right direction to go, but we're not there right now.

Q: Do you believe that a wall to President Trump's liking will continue to be built along the southern border?

A: Oh yeah. We'll continue to build a wall. Like I've said before, the last four presidents have all built walls. Suddenly, everybody thinks that fencing is something President Trump invented, but 650 miles of fencing are already on that border. … This president should have the same right every previous president had to be able to build fencing to protect the nation.

A: So, a couple ways. We should be able to ask companies how they determine their pricing and to be able to push back on it because they haven't had enough push-back. So, for instance, insulin pricing is something we have pushed on pretty hard. In the past month, some of those companies have turned around and said, “You're right, no one has challenged us on this, and so we're going to go back and look at our pricing. And we're going to put in annual caps for insulin prices and to be able to make sure the prices come down for those individuals that are taking that.” That's a big change. The administration has also asked the question, “Why do companies sell the exact same product overseas cheaper than they sell it here?” They're negotiating with those countries a lower price, and Americans are paying more when they could sell the product for a profit in other places for less. That has started a dialogue on international pricing. When people don't get access to medications in the United States, but they do in other countries … we've got to be able to fix that.

Q: What is the No. 1 issue within the last four months that you have heard about from your constituents in Oklahoma?

A: Most of the time, the No. 1 or No. 2 question is on immigration. Almost always. That comes up pretty rapidly.