THE CURSE OF LA LLORONA is a spooky, sympathetic thriller 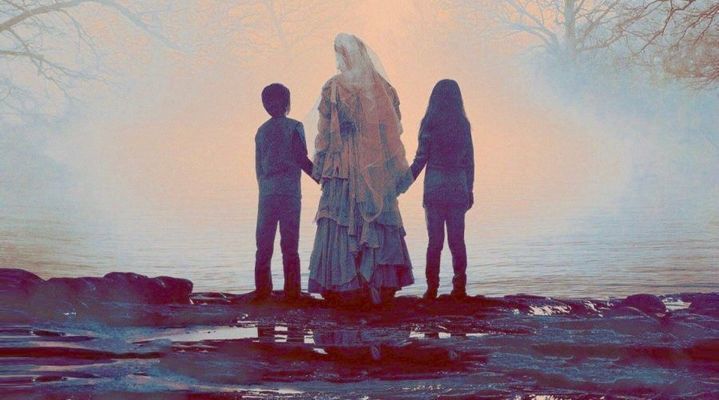 “Your children are safe now, but have they heard her crying? Have they felt the sting of her tears? They will, and she will come for them.”

THE CURSE OF LA LLORONA, technically the 6th film in WB/New Line's “The Conjuring Universe” franchise of films, released this past weekend well above modest Box Office expectations to deliver a solidly engaging treat to audiences who want to wet their palette before ANNABELLE COMES HOME is due to arrive this summer.

LA LLORONA, based on the myth of the Weeping Woman from Mexican culture, is directed by Michael Chaves from a script penned by Mikki Daughtry and Tobias Iaconis.

The film, set in 1970's Los Angeles, follows Anna Tate-Garcia (Linda Cardellini) a widowed social worker who inadvertently puts her two children Chris and Samantha in the path of a vengeful spirit known as La Llorona (Marisol Ramirez) who seeks to replace her dead children by taking others.

To protect her family, Anna enlists the aide of renegade preacher Rafael Olvera (Raymond Cruz) to ward off La Llorona once and for all.

LA LLORONA, much like last Fall's THE NUN, aims to please horror junkies and Conjuringverse fans alike. It helps that this film sheds light on a different culture than one normally presented in horror movies, which adds a nice layer of intrigue to the lore and general representation.

Everyone goes to a zombie movie or a werewolf flick knowing that a shot to the head or a silver bullet will solve one or the other, but not many know what exactly La Llorona is capable of, making her the most exciting “new” horror icon since Valak “The Nun” himself appeared in 2016's THE CONJURING II .

La Llorona is a tragic character too, making her a change of pace from the demonic entities the series has showcased like the murderous Annabelle doll, the sinister demon The Nun, or the rabid witch Bathseba. The film opens with a flashback in 1600's Mexico where we find Llorona was once the most beautiful woman in her village. Like all idiots, she falls in love with a handsome ranchero who soon seeks the pleasure of other women. This jealous fit of rage causes her to snap and drown her two children. Realizing what she's done, she casts herself into the river and is doomed to walk for all eternity, crying “Mi hijos!” seeking children to replace her own.

This characterization pays off in the film's climax with a shocking moment that actually brought me almost to tears as it is the first time in the “franchise” history we're allowed to view the monsters as sympathetic, which wouldn't have been sold so well had it not been for the nuanced range of young star Roman Christou as Chris and the gorgeous Marisol Ramirez as La Llorona.

The scares are implemented well too thanks to director Chaves' commitment to the spatial awareness of the family household. Right off the bat we're treated to a great scene establishing the rooms and their location, use, and proximity to one another which means later when the scares start coming they seem much more genuine, because you almost know the house better than your own.

The running thread through these films is faith. The loss of it, finding it, or making of it what you want. When we're introduced to Raymond Cruz's Rafael Olvera he is an eccentric type that rejected the Catholic Church in favor of his own methods that exist “on the fringes of faith and science.” He has a dry wit and gets the most laughs from the film, but his character exists to reinforce the same subversive paradigm of THE NUN's Father Burke...just because a character operates in an unorthodox or scarred manner to carry out what they feel is the right will of God doesn't mean they're “wrong” and need to be “fixed”. Most horror films feature the failure-stricken priest who has to find his own faith again and save the day, which is what makes ventures like LLORONA and THE NUN so refreshing.

Made on a budget that barely skirts under $10 million dollars, in the hands of a lesser production crew this film would look cheap and dated, but that's when a real director with an eye for art takes over and presents something where every cent is seen on screen. Cinematography is done by Michael Burgess who helped give THE NUN its terrifying and Gothic atmosphere.

THE CURSE OF LA LLORONA will leave you satisfied, no doubt, and promises bigger and better things to come from these spin-off films in The Conjuringverse. I definitely don't think this is the last we'll see of La Llorona so listen for her cries...and watch your children.