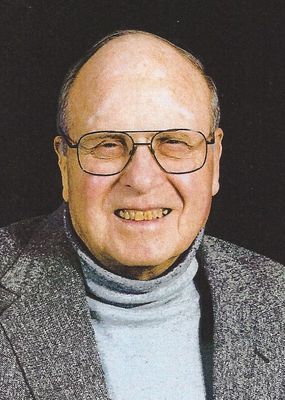 Raymond Wesley Perkins, formerly of Old Saybrook, Connecticut, and Blackwell, Oklahoma, died Monday, March 11, 2019 in Via Christi Village in Ponca City after an extended illness, at the age of 87.

Raymond was born on a family farm in rural Hand County, South Dakota, on February 14, 1932, the fourth of five children of the late Maynard Dobel Perkins and Sara Myrtle (Stigman) Perkins. Raymond received his elementary education in one-room country schools;; his high schooling was at South Dakota State School of Agriculture (now South Dakota State University) in Brookings, S.D., where he graduated at the top of his class. In December 1952, Raymond was drafted into the United States Army, receiving basic training at Fort Leonard Wood in Missouri; then received advanced training as a heavy equipment operator at Fort Belvoir, Virginia. He was sent to Korea, arriving on July 4, 1953, being stationed at Kimpo Air Force Base near Seoul, South Korea. He returned to the U.S. in May 1954, arriving back in time to attend his fiance's graduation from Dakota Wesleyan University in Mitchell, S.D. He was then posted at Fort Leonard Wood to finish out his enlistment, where he was honorably discharged on December 3, 1954. Raymond then returned tot he family farm in South Dakota.

On February 5, 1955, he was wed to Nancy Ann Merrill at Grace Episcopal Church in Old Saybrook, Connecticut; Nancy’s father, the Rev. Edward R. Merrill, was the officiating minister. Raymond and Nancy moved to Austin, Minnesota, in the autumn of 1955, where he attended a trade school training as a television and radio technician. Ray and Nancy, with young son Merrill, moved to Old Saybrook, Connecticut in July 1958, living and working there until his retirement. Together they raised four children: Merrill, David, Timothy, and Julie.

Raymond was employed for 38 years as a radio and television technician with Schultz’s Radio and Television of Old Saybrook. He was active at Grace Episcopal church for 45 years; he also was involved with Jaycees, and as a Boy Scout leader, in Old Saybrook. In the summer of 2003 Ray and Nancy moved to Blackwell, Oklahoma. Once settled, they became active at First United Methodist Church of Blackwell, where Ray became an Adult Sunday School leader. They also would help out at Wheatheart Nutrition in Blackwell, and Ray was a driver for the local Meals on Wheels program. In 2009 they received a Community Service award for their contributions to the Blackwell community. Nancy passed away there on March 29, 2013.

In addition to his late wife, Raymond was preceded in death by his parents; and brother Roy, Albert, and Robert. He is survived by his sister, Elaine Bouzek, of Rapid City, S.D.; children Merrill Perkins of Ivoryton, CT; David Perkins of North Haven, CT; Timothy Perkins of Rodgau-Dudenhofen, Germany; and Julie Perkins of Voluntown, CT; also by six grandchildren, and two great-granddaughters.

A memorial service for Raymond will be held at First United Methodist Church of Blackwell at 10:40 a.m. on April 28, 2019. Burial will be private, in Connecticut at a future date. In lieu of flowers, donations may be made to the Amyloidosis Foundation, 7151 N. Main St., Clarkston, MI 48346. www.amyloidosis.org.