True Value to close by April 30 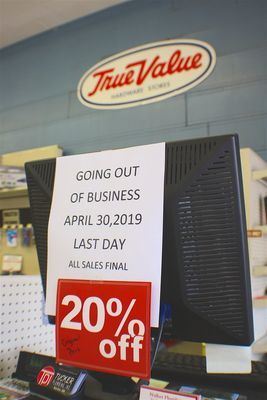 After nearly a century of service to local homeowners and tradesmen, Blackwell Hardware will permanently close on April 30, 2019.

The decision to shutter the hardware store, which is affiliated with the nationwide True Value chain, was announced Monday, April 15 by store co-owners Barry and Shari Briggs. They cited a poor local economy as the reason for the store's closing, a move that they have been discussing for months.

“This decision has been a tough one to make,” Barry said. “It was based on our local economy. So many things have taken Blackwell's economy down, and we have had lower sales year after year. It's hard to see any improvement coming for us soon enough.”

Downturns in the oil industry and a decrease in the number of occupied rental properties in Blackwell caused the store to lose several customer accounts, Briggs said. He added that growing online retail sales nationwide are making it harder for brick-and-mortar stores to makes ends meet.

Briggs said that all items in the store will be sold “in some way.” Currently, all prices have been marked down by 20 percent, and those prices will continue to be lowered in increments. Once most of the merchandise is sold, the property and remaining assets will be sold at auction, he said. The store may stay open for a short time after April 30 in order to continue clearing out merchandise.

“We're just focused on getting this thing closed out,” said Briggs.

Aside from pipe fittings and paint, the store's rental equipment will also be sold. This includes a skid-steer, a backhoe, trailers, jack-hammers, garden-tillers, floor-sanders, walk-behind brush-mowers, chainsaws, and other items.

Blackwell Hardware's sister store in Newkirk will also be closing on April 30. Sales are currently ongoing there as well.

The Briggs family purchased Blackwell Hardware in 2006 from Ralph and Doris Gammill, who had owned the store for 25 years. Before the Gammills owned it, it was known as Pam's Hardware for several decades. Many customers, Briggs said, still call it “Pam's.”

And to his longtime customers, Briggs says: “Thank you.”

“We appreciate our customers and the town,” he said. “They have been faithful to our store and have stayed with us as best they could. We've enjoyed a good, long run.”