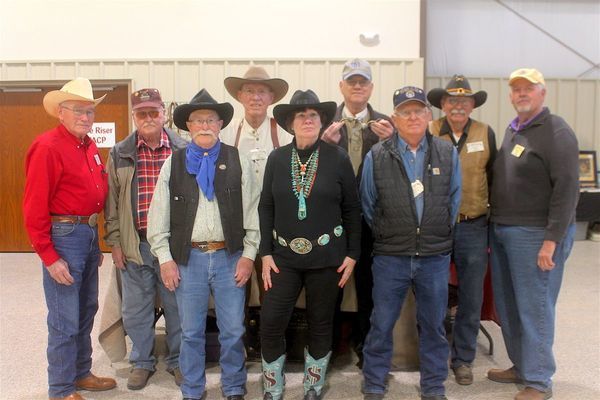 Like the town of Agua Fria in the old Marty Robbins song, the Blackwell Event Center was filled with cowboys and outlaws on Friday, April 12 and Saturday, April 13 for the annual western memorabilia show commemorating 126 years of The Miller Brothers 101 Ranch.

The show, hosted by the 101 Ranch Collectors Association, was held from 4 p.m. - 7 p.m. Friday and from 9 a.m. – 5 p.m. Saturday. It boasted an assortment of vendors, who sold “western and primitive memorabilia” including antique firearms, postcards, textbooks, photo albums, hats, boots, knives, equine equipment, and more.   Albert Stehno, a member of the Old-Time Cherokee Strip Cow-Punchers Association, is a collector and author based out of Billings. He called the event a “phenomenal success.”  “We had nine regional museums and over 30 vendors with about 70 tables full of personal collections and items for display or for sale,” Stehno said. “Many of them very rare and virtually priceless. The event was a great success for the 101 Ranch Collectors association, with nearly 400 people attending and participating in this year's show.”

According to Stehno, the show has been held annually since 2000. While it has been held in Perry, Guthrie, and Ponca City in the past, members of the 101 Ranch Collectors Association's board of directors are optimistic towards the idea of holding the event in Blackwell in the future.   “We have a found a new, permanent home in the spacious, outstanding Blackwell Event Center at the fairgrounds. We plan on have the show here again in 2020,” Stehno said.

According to the Oklahoma Historical Society, the Miller Brothers 101 Ranch, which was located near Ponca City, earned most of its fame and acclaim from its internationally-renowned Wild West shows.  Beginning in 1905, when the owners invited members of the National Editorial Association to view the exhibition entitled "Oklahoma's Gala Day,” ranch-hands and Native American equestrian performers wowed audiences with their daring equestrian stunts and bull-riding feats. The famous Apache warrior Geronimo worked with the show, which later featured Lucille Mulhall, George Elser, and Bill Pickett.

Several entertainers with connections to the ranch, including Will Rogers, Tom Mix, Jack Hoxie, Mabel Norman, and Buck Jones, would later go on to become popular Hollywood movie-stars.   The show suffered in the middle of the 1900s with the onset of the Great Depression and the subsequent breakout of World War II. Unable to compete with modern films and other attractions, the ranch shut down in the early 1930s. The expansive parcel of land that the show called “home” was later sold.