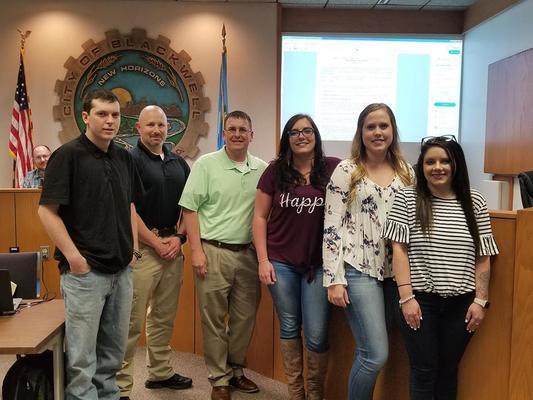 “We are blessed in the City of Blackwell to have such an outstanding group of professional who are certainly deserving of recognition,” Wood said, “it is truly remarkable to observe their efforts during times of extreme activity and stressful situations. These men and women are the first and most critical line of contact our citizens have with emergency services.”

The Council then heard from treasurer Meredith Meachem-Wilson who updated that sales tax was trending “very well” and that various City departments were doing well to maintain their budgets.

“I think department heads were also pleased about today's workshop,” Meredith said, “and I know we will continue to work on the budget for the future.”

Next up, John Robertson approached as Director for the Chamber of Commerce, Tourism, Blackwell Industrial Authority, and Economic Development Authority.

“I received an e-mail to be here tonight to discuss Blackwell Tourism as well as the Chamber of Commerce, you all had questions, I'm here to answer,” said Robertson.

Councilman John Webb spoke first, asking if John “would explain the monies that goes to tourism, 'x' amount of that then gets moved onto the Chamber?”

“That's correct,” Robertson said, “you've seen our numbers and it has been that way for decades. We have never rattled that cage or rocked that boat,.”

Robertson explained it had been that way since the late 1990's, long before he was even involved.

“I've never questioned it, that's been the way it has always been set up,” said Robertson, who has been involved with the Chamber of Commerce since 2013.

“I've looked into the documentation we have regarding that,” City Manager Janet Smith said, “it is based off an ordinance and contract for services that specifies a certain amount of money will go through the Chamber into Tourism, as the Chamber directs Tourism activities and is responsible for providing reports.”

Part of said ordinance and contract stipulates that the Chamber report to the City Council by the middle of April, every year, to update on Chamber spending and fund allocation.

“In my conversation with John the other day I received Chamber financials as well as Tourism financials and after speaking with both entities... there's an amount of money somewhere around $4,900 a month that goes to Tourism and the agreement is that between the two groups that the money gets allocated in some fashion.”

Smith said rounding up to $5 thousand the Chamber and Tourism both get $2500 a month and the only thing specifically budgeted has been a $300 dollar a month expenditure for part-time admin help.

“We don't segregate those dollars,” Robertson said, “we never have since I've been here. It goes into a general fund and we spend that as expenses come through.

Smith praised Robertson for his extensive and exhaustive works with the entities he spearheads, and said that in her discussions with Robertson they came to an agreement that the City of Blackwell could assist in making those dollars go further by keeping the funds in house.

Robertson made note that the BIA's last available complex has had a verbal commitment made to it and praised businesses like BOSTD and HMT who have been flourishing in Blackwell.

Moving onto business, the first item on the agenda was the appointment of Traci Hanebrink to the position of City Clerk. City Manager Smith explained that Clerk Merry Whitham tendered her resignation due April 24. Smith praised Traci as the “right person for the job”.

Lauren Trevizo was then approved for the position of Deputy City Clerk.

The next item on the agenda was the Oklahoma Municipal Assurance Group (OMAG) ballot where the City would appoint someone from the ballot as their OMAG representative.

“There's 8 or 9 to pick from,” Mayor Greenfield said, “if anyone knows any of these individuals or has any questions on the matter.”

After several seconds of silence, Greenfield asked if anyone had any questions, a motion, or a second to the matter. Several more seconds of intermittent silence passed until Councilman Marquardt seconded the motion to keep their same rep.

Following that the Council heard from the Lake Blackwell Trust Authority to amend a by-law in regards to the process of becoming a nominee for the position of Trustee. The matter was approved.

The last order of business was the City Council approving Chuck Anderson and the Street Department for seeking bids on the cleaning and reshaping of the ditch between the north side of Highway 11 and the east side of 44th Street.