AVENGERS: ENDGAME carries the best and worst of the MCU on broad shoulders 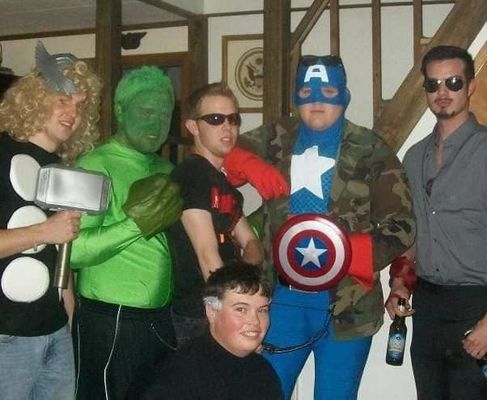 “I’m sorry I couldn’t give it to you sooner.”

AVENGERS: ENDGAME released this past weekend and honestly, you’ve probably already seen it or at least thought about it. The film is directed by Anthony and Joe Russo from a script by Christopher Markus and Stephen McFeely and acts as the culmination of a decade-long series of films in the “Marvel Cinematic Universe” that came from humble beginnings in 2008’s IRON MAN. The featured photo here, in fact, is yours truly and his friends the night of 2012's AVENGERS. It's been a long road since.

ENDGAME picks up after the apocalyptic events of last year’s INFINITY WAR where the Mad Titan Thanos effectively wiped out half of the universe with an act known as “The Decimation” and left our heroes to face the fact that they lost…but five years later, a theory by “Ant-Man” Scott Lang (Paul Rudd) harkens back to a line Tony Stark uttered in 2012’s THE AVENGERS: “If we can’t protect the Earth you can be damn sure we’ll Avenge it.” With one last shot, our surviving heroes embark on a perilous journey through space and time to reverse Thanos’ extinction level attack and save the universe.

ENDGAME, clocking in at just over 3 hours, is a highlight reel and love letter to the 20+ films that precede it. If you’re even vaguely invested in Disney’s web of superhero blockbusters, you’ll find something here for you.

I’ve criticized the “MCU” heavily because of its jarring lack of any cinematic visual or emotional depth, and that was somewhat rectified by a few brilliant moments in last year’s INFINITY WAR but sadly reinforced by ENDGAME. The Russo Brothers, aided by cinematographer Trent Opaloch, have perfected the “art” of merely letting things happen in front of a camera.

Despite a few wonderfully framed shots such as a post-Decimation New York City, the sacrificial planet of Voromir, and a few more great ones here and there, ENDGAME’s profound lack of a visual identity comes heavily lumbering into focus during the film’s final battle sequence that results in CGI super heroes flying around a nondescript battlefield, shooting various colors of energy from their hands.

But visuals have never been the MCU's strong point leaving “Phase 1” with a few exceptions, so let's talk about why we're all here: the characters.

Everyone who didn't get time to shine in INFINITY WAR gets their moment here, as this is very much the “B side” to that movie, a perfect companion piece. If Chris Pratt's Star Lord, Josh Brolin's Thanos, and Elizabeth Olson's Scarlett Witch were the stars of the previous film, this chapter belongs to Oscar-nominee Jeremy Renner's Clint Barton (Hawkeye), genre star and Golden Globe nominee Scarlett Johansson's Natasha Romanoff (Black Widow), and MCU founding father Robert Downey Jr. as Tony Stark aka Iron Man.

The film's emotional moments work exponentially well, which is ironic given that they really shouldn't as they are framed around the franchise's two most under-utilized talents with Renner and Johansson. The cold-open to ENDGAME starts with Renner's Hawkeye enjoying a lazy afternoon picnic with his wife and three children...who are then all turned to dust as a result of Thanos' snap. This results in Hawkeye going off the deep end and turning into a murderous vigilante with a sick haircut, carrying out his own brand of justice in a Post-Avengers world.

It is this character that best exemplifies the strongest point of the film and leads to one of the absolute best “behind the mask” moments I've seen in a comic book film since we got to see Nicolas Cage painting his eyes as Big Daddy in 2010's KICK-ASS.

The scene in question shows Black Widow sitting down to eat a sandwich she made for dinner and slowly having an emotional breakdown at the realization she and the other Avengers are essentially powerless in this “new world” and her tearful plea to Don Cheadle's War Machine to find Hawkeye, after they both realize he's executing cells of cartel members in Mexico. She's strong but vulnerable, she's normal. She's human.

It's an unexpectedly powerful and poignant moment that is so well done by Johansson it nearly overshadows anything else in the film and perhaps either intentionally or accidentally calls back to a scene they shared in Joss Whedon's 2012 AVENGERS where she tells him “this is nothing we were ever trained for.” It's these moments of humanity from “the little people” of this franchise that are tragically few and far between and add a crucial perspective for people who don't have powerful weaponized suits, magic hammers, super soldier serum, etc. It's the thing the MCU has sidelined that rival franchise DC is so adept at: making the “human” characters matter. They do it here and do it well, but is it too little too late?

ENDGAME starts bleak and depressing, much how INFINITY WAR ended, but slowly finds itself turning into a wonderfully fun time travel adventure which works really well until you start thinking about it too much. The characters all have a great rapport and the entire sequence set during 2012's Battle of New York is well executed and creative, tapping into nostalgia and fresh thrills to provide a fresh perspective. Ironically the film works best when the superheroes aren't doing anything super heroic. There's a lot to examine in a 3 hour film, and I could go further into detail on how wasted Chris Hemsworth's bloated alcoholic Thor- played almost entirely for laughs- is or how one character's sacrifice was excruciating but undeserved, or how the tragic antagonist Thanos is reduced to a lumbering cartoon villain...but it all seems for not. You'll watch this any way, and you'll probably enjoy it.

AVENGERS: ENDGAME carries the flaws and strengths from a decade of Marvel films on it's broad shoulders, in the best and worst ways you can probably imagine. Even still I'd place it as one of the franchise stand-outs. There's a satisfying conclusion here that all audiences will likely enjoy, and there's plenty left to be excited for going forward as this film primes the universe for a whole new series of adventures.