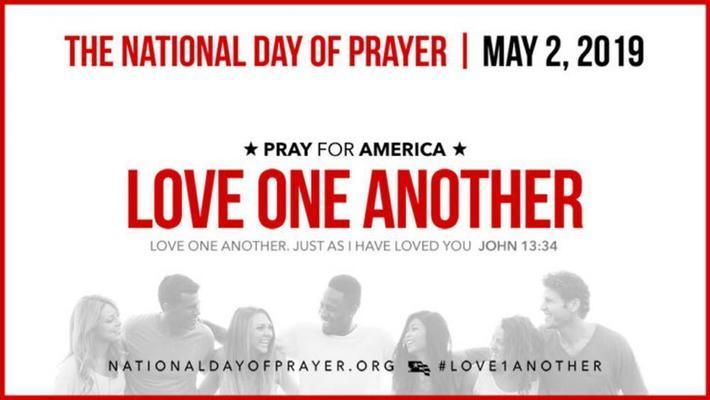 Americans across all 50 states will gather in churches, local businesses, the steps of city halls, schools, neighborhoods and public gathering places for a day of public prayer for
the United States of America.

“We tend to forget that Jesus didn’t say we would be known by our creeds or by our knowledge or how much we know about the Bible — He said we would be known only by our love,” Dr. Ronnie Floyd said when revealing the 2019 theme at a leadership summit last fall. “And love has been painfully absent in America in so many ways.”

Dr. Ronnie Floyd is the president of the National Day of Prayer Task Force, which mobilizes Americans to participate in prayer gatherings on the day of the observance.

On Thursday evening, Dr. Floyd will lead the National Observance, which will be held at 7:30 p.m. ET in the National Statuary Hall of the U.S. Capitol. In attendance will be a few members of Congress as well as hundreds of American faith leaders.

The National Observance will bring together a multiethnic, cross-denominational coalition of participants. Among these are Rev. Samuel Rodriguez, Rev. Anthony B. Thompson and Julio Arriola, a missionary to Mexico. Rev. Thompson is pastor of the Holy Trinity Reformed Episcopal Church of Charleston and the author of “Called to Forgive” (June 4), a book about the 2015 Charleston shooting at the Emanuel AME Church. His wife, Myra Thompson, was one of the nine people who were killed at the church shooting.

Andrew Brunson — who last year was released from prison after spending 2 years in a Turkish jail for his faith — and his wife Norine also will participate in the event, along with Jay and Diane Strack. Jay is the founder of Student Leadership University, and Diane is the co-founder of National Women’s Prayer Movement. The renowned Brooklyn Tabernacle Singers will lead worship.

In 2018, an estimated 50,000 gatherings across all 50 states were held on the National Day of Prayer. More than 1 million people from 38 countries viewed the broadcast of the National Observance. The 2018 theme, “Pray for America — Unity” went viral and trended No. 1 nationwide on Twitter throughout the

day. The National Observance will be streamed live on Daystar Television Network and on the organization’s website (www.NationalDayofPrayer.org) and Facebook page.

The "Prayer Priroties" are as follows:

Ask God to bless the United States of America

“Blessed is the nation whose God is the Lord—the people He has chosen to be His own possession!”

• Ask God to forgive us as a nation for our sinful choices and ways, covering us with His Sonʼs blood, and extending blessing and favor upon the United States of America because of His great mercy.

• Ask God to bless America spiritually in a new and fresh way and move us to return to the Lord our God.

• Ask God to bless America by raising up godly leaders in all areas of our nation: locally, regionally, statewide, and nationally.

• Ask God to bless America economically so that all people in our nation will be blessed and so we can be a blessing to the entire world.

• Ask God to bless America by securing our nation from all evil and harm from within our nation and from outside our nation.

Pray for Americans to Love One Another, beginning among Christ followers

Love one another. Just as I have loved you.

• The present anger, division, and broken relationships in America are calling us to pray for and take all necessary actions to remember Godʼs love for us so we will love one another.

• God is the only One who can bring unity, harmony, and oneness in America; therefore, we look only to Him in prayer, asking for this love to prevail.

• Call upon God to create a major Love One Another movement across America and empower us to make every effort to live in unity with one another, call for unity, and continually forward unity in America.

Pray for the centers of influence in America

“First of all, then, I urge that petitions, prayers, intercessions, and thanksgivings be made for everyone, for kings and all those who are in authority, so that we may lead a tranquil and quiet life in all godliness and dignity.”

• Pray for the executive, legislative, and judicial branches of the United States government to value one another, respect one another, and work together for the good of our nation.

• Pray for Americaʼs military, its leaders, and all personnel to be protected by God, and for the courage to depend upon God.

• Pray for the members of our media in America to be respectful of all people, bearing truth, and inspiring our nation with stories about loving one another.

• Pray for Americaʼs businesses to have leaders of integrity, be creators of economic blessing, and givers to the community.

• Pray for Americaʼs centers of education to create a culture of respect and love for one another.

• Pray for the churches of America to model and be examples of love for another, inspiring a Love One Another movement to occur.

• Pray for the families in America to return to the biblical model, creating families that practice forgiveness and love.

Ask God for the National Day of Prayer on Thursday, May 2, to become a catalytic spiritual movement across America

“They all were continually united in prayer.”

• Lord, we ask You to call your church to love one another, so Your church can call our nation to love and unity on the National Day of Prayer and in the future.

• Lord, we ask You to move each of us to love one another in the same way you love us: willfully, sacrificially, and unconditionally.

• Lord, we ask You to empower our National Day of Prayer volunteers across America, who will lead and serve in thousands of observances on Thursday, May 2.

• Lord, we ask You to give Dr. Floyd the exact words needed for every media interview related to the National Day of Prayer.

• Lord, we ask You to use the thousands upon thousands of observances of the National Day of Prayer to be a catalytic spiritual movement across America, ushering in the revival of the church and the next Great Spiritual Awakening in America.