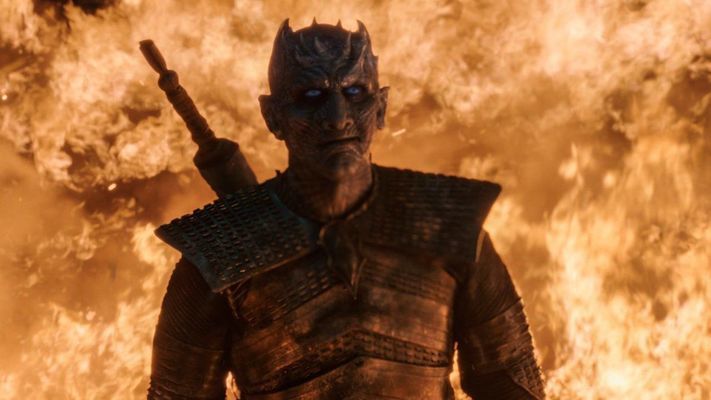 It was a major weekend across all major nerd camps with the PlayStation 4 zombie game “Days Gone” arriving, AVENGERS: ENDGAME, and Sunday night's epic Battle of Winterfell during HBO's “Game of Thrones”. A lot of people died in a lot of different universes, to say the least.

I posted my ENDGAME review on the Blackwell Journal website and i'm still deep into “Days Gone” so I don't quite have anything substantial to say, but before continuing I will say that you've been warned, because here be spoilers.

In an episode that was dark as the night in both tone and cinematography (the latter being a point of attack from detractors) we got to see The Night King and his army of undead winter zombies throw themselves at Winterfell, the Stark's ancestral home and last bastion of hope to keep the zombie menace from spreading further into Westeros. Characters died, characters lived, and shockingly hardly anyone talked.

In Sunday's 80 minute almost-silent-film of an episode, we got to say farewell to Theon Greyjoy which wrapped up his long and twisted life as a man who was made, unmade, broken, unbroken, and finally allowed a sliver of normalcy and peace before choosing to die with his nearly adoptive brother Bran Stark who tells him “Theon...you're a good man” just before the poor lad made one final push against The Night King.

The episode was one long exercise in survival horror, drawing inspiration from iconic zombie films and games like Zack Snyder's DAWN OF THE DEAD or Marc Forster's WORLD WAR Z and one particular scene involving Arya in Winterfell's library that felt very obviously lifted from something like PlayStation 4's “The Last of Us”. That latter scene being a real stand-out, carried by actress Maisie Williams and some really well choreographed performers as the White Walker ice zombies.

A shocking show this past Sunday was The Red Woman's return. Yes, Melisandre of Asshai, last seen in the company of Stannis Baratheon before the former inspired the latter to burn his young daughter alive in order to ensure a decisive victory which never came.

Melisandre used the last of her god R'hllor's powers to deliver flames unto Winterfell which were crucial in the final battle, and sadly ended her character's unfulfilling arch all the same. Showrunners D&D dropped the ball so ridiculously hard on Stannis and his entire storyline that I'm almost convinced they were content with letting Mel just...vanish...but remembered her actress was contracted still so had to throw her in to be killed off. That being said the one character in Camp Stannis they didn't annihilate was Davos Seaworth (Liam Cunningham) who got a nice, wordless, moment with Melisandre in that episode which was handled with the kind of tact and gravitas you would expect from Cunningham and Carice van Houten who plays Mel.

So, Arya is the one who shanks The Night King and pretty much causes all the badguys to self-destruct...what now? Well. I've long said Daenerys Targaryen was the secret “Final Boss”, and we still have two more antagonists to get through in these final three 80-minute episodes. It seems our heroes are marching South towards King's Landing...and who's waiting for them? Why none other than Cersei Lannister and Euron Greyjoy. Or, as my friend charmingly put it, “a pregnant lady and a pirate”.

I'm kind of glad that “The Long Night” and the battle against the walkers is over, only because Lena Headey and Pilou Asbaek- who play Cersei and Euron respectively- are so damn fun to watch on screen. “Game of Thrones”, since moving past the books, lacks the intelligence of writer George R.R. Martin's source novels and to makeup for its lack of smarts it supplies us with gleefully evil and fun villains. Hell, last season Euron and Cersei looked straight out of Gore Verbinski's PIRATE OF THE CARRIBBEAN film, and I mean that as a compliment.

So what crazy shenanigans will our heroes get into on Sunday? Hopefully some more scenes between Arya and Gendry, for starters....