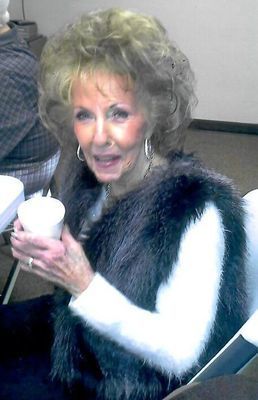 She married her soul mate, Louis Skrdla on June 6, 2015. They shared a love for Jesus, dancing, RV Camping, shopping and the company of friends & relatives. She also spent many hours with Louis riding along in the combine while he was farming. She never slowed down.

Over the years, she worked numerous jobs including Clerical work at NOC & Bowker Ford, Aerobics Instructor, and janitor at Northeast Baptist Church, where she was a member.

Maxcine was a sharp dresser and well known for her “outfits”, especially leopard print and sparkly boots. She loved dogs and bred numerous breeds over the years. She was an avid lifetime exercise enthusiast, teaching aerobics in the 80’s and bicycling long distances in her later years.

Maxcine has donated her body to Genesis Legacy Foundation - enabling the critical work of the Medical Education & Research Institute (MERI).