Review: DETECTIVE PIKACHU is family fun with style and heart 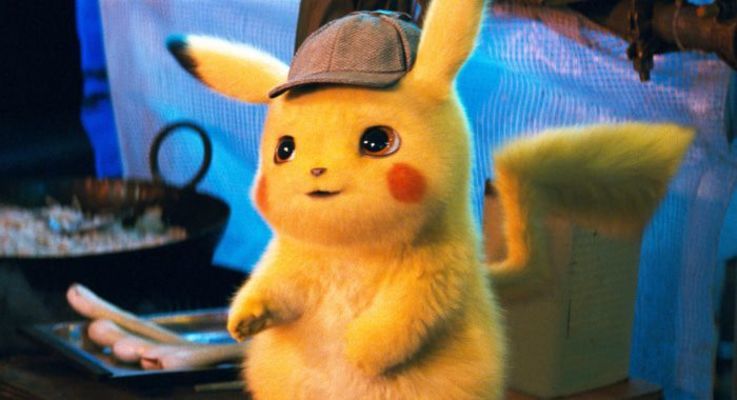 “Down by the docks. Rough part of town, not the sorta place you wanna visit alone at night.”

“Well, actually, I'm pretty good at being alone at night.”

POKEMON: DETECTIVE PIKACHU released this past weekend from Warner Brothers and Legendary, directed by Rob Letterman (Goosebumps) off a script by Dan Hernandez, Benji Samit, Letterman, and Derek Connolly and is a heart-warming film that fans new and old and those young and young at heart can enjoy.

Based on the worldwide phenomenon that produced a cartoon series, trading cards, and video games stretching from the late 1990's and still going strong today, DETECTIVE PIKACHU follows loner Tim Goodman (Justice Smith) who, upon hearing of his estranged father's mysterious death, embarks to Rhyme City where a chance meeting with a Pikachu (voiced by Ryan Reynolds) that he can somehow understand puts him on a course of danger to uncover a secret plot that could potentially change the world...for better or worse.

DETECTIVE PIKACHU is a colorful, fun film that allows audiences to be immersed in a fully realized world of “Pokemon” which are adorable, sometimes scary, critters of all shapes, sizes, and powers. In the greater world, Pokemon are captured, bonded with, and trained for supervised battles. Usually kept in small devices known as Pokeballs. In Rhyme City, however, things are different. Pokemon roam free alongside the humans, and it is touted as the first “truly free” city. It is beautifully realized, and not a second goes by where you don't fully believe in what you're seeing on screen thanks to some top-notch special effects work.

Of course, not all is what it appears to be. At night, Rhyme City is a neon-drenched neo-noir fever dream that looks more like something from 2017's GHOST IN THE SHELL than a Nintendo game. Soon the vivid world of these pocket monsters lends itself to a dark conspiracy that casually involves genetic experimentation, underground fight clubs, shape-shifting assassins, and a pseudo religious messiah figure in the form of Mewtwo. It gets weird fast.

Tim Goodman, played by Justice Smith, is a goofy and awkward protagonist that has a great relationship with Reynold's loveabale furball Pikachu and their banter is what carries almost all of the movie. They're joined by Lucy Stevens- a wanna be reporter played by Kathryn Netwon- and her equally precious Pokemon Psyduck, a tubby duck with bug eyes and latent psychic abilities. The four of them are fantastic, and while there's not enough genuinely great 'human' moments, they serve their roles nicely.

The human cast is rounded out as well by genre actors Ken Watanabe (pulling double duty for WB's Japanese properties from Godzilla) and Bill Nighy. Also appearing are Chris Geere (FX's You're The Worst), singer/actress Rita Ora, and Suki Waterhouse as one of the more creepy antagonists I've seen recently not only in a kid's movie but in general.

The film's gorgeous aesthetic was done through Director of Photography John Mathieson, a two-time Oscar nominee responsible for GLADIATOR, PHANTOM OF THE OPERA, and LOGAN. His gritty realism and eye for the grandiose are perfect for the specific tone PIKACHU seems to operate at. Music was done by Henry Jackman which makes sense, as there are beautiful tracks that range from heart tugging to pulse pounding like his work on KINGSMAN: THE GOLDEN CIRCLE, “Uncharted 4”, and KICK-ASS.

DETECTIVE PIKACHU is a drama/adventure movie more than a “Pokemon battle film” so if you're looking for nonstop action this won't deliver. It's more of an introduction into this world than anything else, which is fine by me. There's enough here though for kids to be enthralled and adults to be entertained, and despite some reviews claiming you need a doctorate in Pokemon to understand the film, I got along just fine and I barely remember anything about the franchise past 2005.

The film works more to raise some daunting implications for the soon-to-be Pokemon film universe, and I think Mewtwo has the potential to really be an incredible plot point moving forward. Some might be let down by what I assumed was an obvious build-up to the antagonist characters of Jesse and James as well as the organization of Team Rocket, but I'm confident this is not the last time we'll be taking a trip into the world of Pokemon.

All things said and done, I highly recommend DETECTIVE PIKACHU.