Review: JOHN WICK 3 is an artful, cathartic, showcase of violence 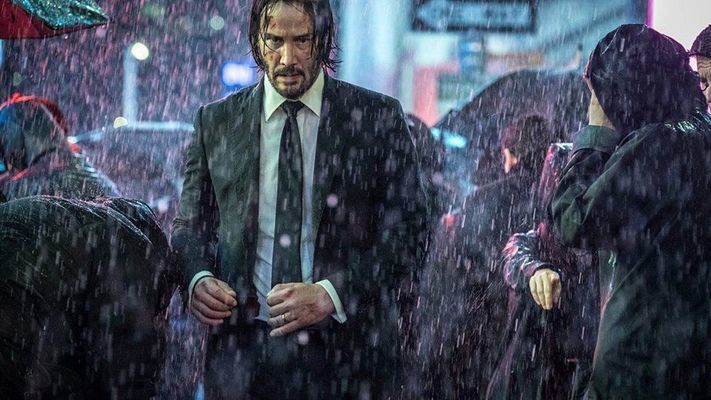 “If you want peace, prepare for war.”

Directed by Chad Stahelski and written by the quartet of Derek Kolstad, Shay Hatten, Chris Collins, and Marc Abrams, the film sees the titular John Wick (a nearly mute Keanu Reeves) excommunicated from his high-concept world of assassins with a hefty price on his head and no choice but to kill or be killed as he seeks “The High Table” to clear his name.

JOHN WICK 3 is a sweeping, globe-trotting exercise in violence where bodies drop like flies under a neon heat lamp. The film relishes in action, and there are too many stand-out scenes and kills to properly describe in this review, so I’ll just highlight a few. You will see men murdered by: books, dogs, knives, more knives, horses, motorcycles, and guns. Lots and lots of guns. By the time the final action set-piece is playing out in the brooding, gothic haze of The Continental Hotel where heavily armored paramilitary commandos are getting their eyes and brains splattered through the green misty air by John Wick’s delectably efficient use of a 12-gauge shotgun the audience has effectively seen more people die than a soldier on the front-lines of the Civil War.

JOHN WICK 3 is a cathartic showcase of gore and violence framed and shot through such aesthetically appetizing locales like a rain-drenched New York City, a Middle Eastern castle compound, a claustrophobic bridge at break-neck speed, the aforementioned art-deco Babylonian tower of the Continental Hotel, and finally a masterful kaleidoscopic showdown in a two-story penthouse room of floating staircases, mirrored walls, and sleek glass.

I emphasize of course how beautiful the film looks because it is such contrast to almost comedic, borderline slapstick nature of violence that begets it. By the time Halle Berry’s character is sending her two attack dogs flying over obstacles, shambling up walls, and taking meaty chunks out of the groins, arms, and necks of anyone in her path while her and Keanu Reeves' John Wick are popping headshots off with the accuracy of a video-game cheat you almost forget what the point is…until you don’t.

There’s a strong underlying theme in the film of mankind’s primal instinct of survival and what- if anything- we are surviving for. Every character in the film has some sort of legacy that they are attempting to live for the preservation of, and it is such a universal and simple concept that once it gets ingrained in the audience’s psyche it stays with them and anchors them to the core of the film even while blood and body parts and spiraling and splattering like a macabre pinata at a child’s gleefully torturous birthday party.

Keanu Reeves is nearly a silent film star over the course of the trilogy, and this point is hammered hard in one brief sequence where John finds himself in a downpour in the heart of Times Square where Buster Keaton’s 1926 film THE GENERAL is displayed, playing in contrasting black and white on a towering billboard screen, reminding us that this is essentially the gory evolution of the silent film era trading goofy fisticuffs for 9 millimeter handguns.

Keanu is joined once again by a fantastic cast including franchise mainstays Lawrence Fishburne as the animated and somewhat insane Bowery King, Ian McShane as Winston, and Lance Reddick as the monotone concierge Charon. Newcomers include Asia Kate Dillon who audiences may recognize from Netflix’s “Orange is the New Black”, playing a character working directly under “The High Table” known as The Adjudicator. The on-screen presence she commands through fierce steely eyes under heavily painted eyeshadow gives her a memorable place in the pantheon of notable femme-fatale henchpeople and I look forward to her return in CHAPTER 4.
Another knockout is Polynesian actor Mark Dacascos as the film’s chief antagonist “Zero”, a gaunt and intimidating martial artist who is an in-universe fanboy of John Wick’s. The performance is endearing and almost goofy while remaining almost unnerving.

There is so much to say about JOHN WICK 3 but so little room to write, so I’ll just leave with this: it is a must-see for action aficionados and is a testament to the fact that in a decades time this franchise will be heralded and remembered fondly for bringing R-rated action back to the masses.