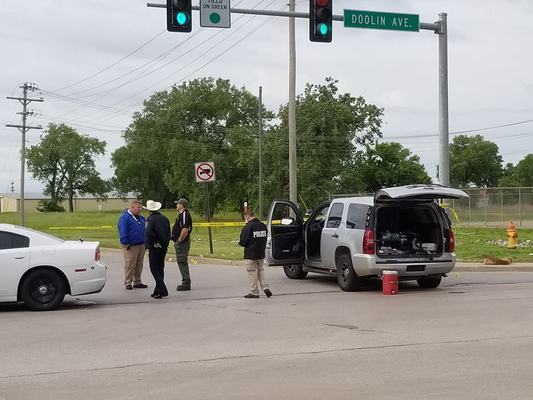 The Blackwell Police Department and the Oklahoma State Bureau of Investigation are investigating an officer-involved shooting that occurred early Monday morning.

Around 3:00 a.m., the police department began receiving calls that shots had been fired and a vehicle had been struck in the 1300 block of South Main Street in Blackwell across from the Memorial Pool.  Officers arrived on scene, and the police department soon received additional calls of shots being fired. Callers said shots were fired from a white pickup truck at various points across town, according to an OSBI release.

Officers located the pickup, and a pursuit began with gunfire, according to the press release. Eventually, the pickup came to a stop at 13th Street and Doolin Avenue. When officers approached the truck, they found 34-year-old Michael Ann Godsey dead in the driver's seat.

Two officers were involved in the shooting, and one sustained minor injuries. Both officers are currently on paid administrative leave, but neither have been named by the department. The OSBI's investigative and crime scene units responded to the location of the shooting.  Several areas were taped off around Blackwell Monday morning, including: the intersection of 13th Street and Doolin Avenue, a one-block area on South Main Street, and a one-block area on West Doolin Avenue.

“It is important we all understand that a case of this significance takes time and due diligence to ensure nothing is missed,” said Blackwell Chief of Police Dewayne Wood. “We're currently working with the OSBI to ensure that they have everything they need. Immediately after the incident, we requested an independent investigation by the OSBI, who will review all of the evidence collected. Once they've completed their investigation, it will be sent to the district attorney for review.”