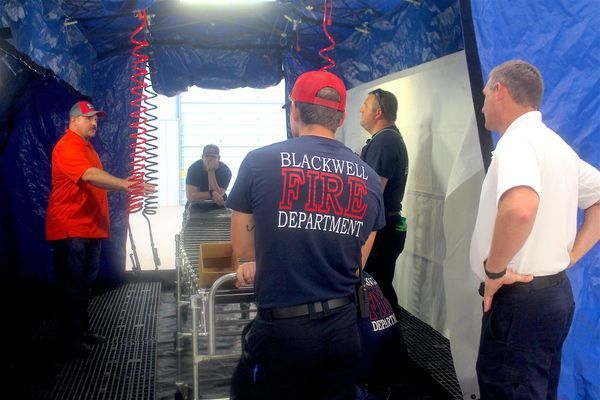 The Blackwell Fire Department held a training exercise for the handling of hazardous materials last week at the Blackwell Event Center in conjunction with fire departments from Newkirk and Perry.

"  A blue decontamination tent, granted to the Blackwell Fire Department by the Department of Homeland Security in the early 2000s, was the base of operations for the afternoon's training, according to Fire Chief Cory Hanebrink.   “The [decontamination] tent would be set up in the 'warm zone,' which would be placed just outside of the affected area,”

The tent is set up with two “lanes” on either side and a conveyor belt down the middle, where individuals in the contaminated area would place their belongings, sending them through to be cleared of contaminated materials.

“Firefighters, EMT personnel, and victims, they all go through taking off anything they had on them – jewelry, glasses, shoes – and put them in the bin. Then, they would strip down to be sprayed and decontaminated. There's a changing area where they'll have gowns to cover up while we make sure their items are clear,” Hanebrink said. “For the training, we just use soap and water.”   He explained that situations involving hazardous materials could vary wildly due to Blackwell's proximity to Interstate 35, a major highway.

“Where Blackwell is, right here on I-35, there are a lot of tankers and transportation vehicles that pass through. So if a spill were to happen or a crisis-like event, we would call in responders from Newkirk and Perry, set the tent up, and act accordingly.”

Local firefighters have used the tent for several exercises over the last decade. The most recent one was held two years ago, where first responders tested Blackwell Regional Hospital's ability to handle a significant influx of patients from a crisis event.

In other fire department-related news, Hanebrink noted the “significant efforts” made by firefighters during a recent flooding of the Chikaskia River. He said that local firefighters and police officers worked together “exceptionally well” to notify residents in at-risk areas of the rising waters.