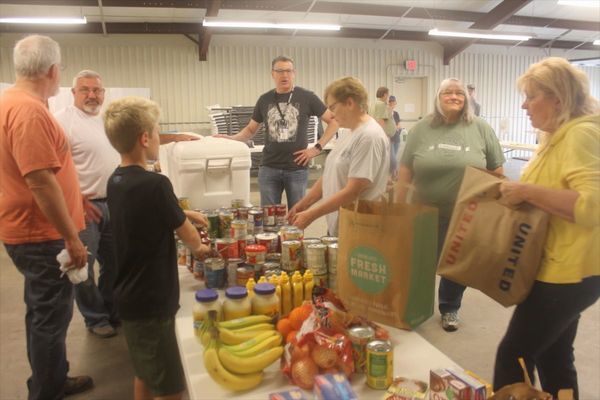 With close to 400 area families being displaced as a result of torrential rain and widespread flooding, Blackwell residents have come together the only way they know how: to help their fellow man.

On Thursday and Friday, local churches teamed up with Blackwell business such as Walmart, United Supermarkets, and Shepherd Oil to provide food and supplies to families and individuals that were impacted by severe weather. The Blackwell Area Chamber of Commerce and the city of Blackwell also pitched in to help.

Matt Smith, senior pastor at Immanuel Baptist Church, worked Thursday morning at the Kay County Fairgrounds, where he and more than 20 other volunteers were hurriedly stocking bags and care-packages full of food items, cleaning supplies, and medical gear.

“This was really just a spontaneous thing,” Smith said. “We came together after seeing such a need on Facebook following the flooding. A lot of people were without food and essential items after having their homes flooded and their power out. Soon, all of the community churches came together, and we had people asking how they could help.”

The city of Blackwell allowed one of the buildings at the fairgrounds to be used for the distribution of goods, and within an hour of being open, more than 10 families had already come in to seek help.

“Anybody that has a need, they come to us,” said Smith. “This is a state of emergency, and we're helping Blackwell residents in need.”   Centerpoint Energy, United Supermarkets, Shepherd Oil, and Walmart all donated supplies, including cakes, bags, and ice, among numerous other items.