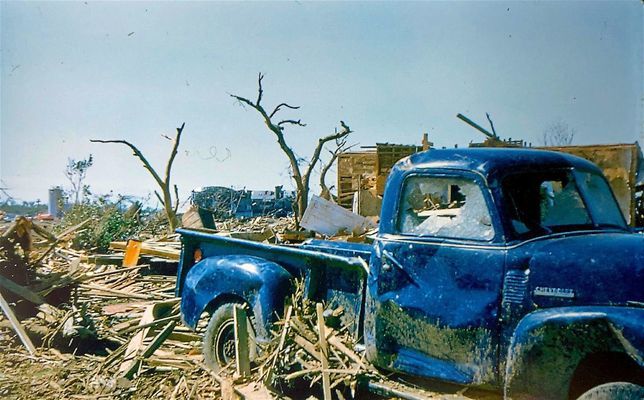 Editor's Note: This month marks the 64th anniversary of perhaps the most horrifying event in Blackwell's history, an EF-5 tornado. In today's issue, we're looking back on the events of May 25, 1955: what happened, how people reacted to the disaster, and how our community pulled through. We hope you will enjoy our look back on this infamous day.

The wind howled, barreling across the Oklahoma prairie like a herd of a thousand horses, with hooves beating hard and manes flying. Heavy rains beat down on rooftops and roadways, saturating the ground, making miles of muddy mires. The conditions were prime; the time was right.

Soon, the air began to swirl: Hot vs. Cold, Left vs. Right, locked in a fight to the death.

It was a battle that had been endured before – and has been played out ever since. Each spring, hundreds of tornadoes wander the southern plains, devouring and destroying all that lies before them.

But this battle was different. On this day, those two atmospheric juggernauts fought for supremacy. They did not die in the battle – but their battle spawned the deaths of many.

Those individuals lived – and died – here, at the hands of Mother Nature, a woman not known for her good temperament.

That battle would become known as the worst disaster to ever hit Blackwell, Oklahoma: The Tornado of '55.

ON MAY 25, 1955, Blackwell, Oklahoma would be like a skyscraper in the path of a massive wrecking ball. An EF-5 tornado – one of the most severe and life-threatening of all of nature's monsters – would decimate a major portion of the city. Following along the eastern side of Blackwell and eventually ending up in Udall, Kansas, the tornado wiped out homes, buildings, and businesses, claiming nearly two dozen lives and leaving hundreds injured.

This is the story of that day.

It was in Noble County that the tornado was born. At approximately 9:00 p.m that night, a frigid cool-front intertwined with a sweltering warm-front, forming the vortex of circulation known as a tornado. As it moved along its path, the twister gained momentum. It gave little warning of its intentions, hitting an already weather-beaten Blackwell at approximately 9:25 p.m.

The damage was unparalleled.

According to archives from the Blackwell Journal-Tribune, the tornado wiped out 29 city blocks. The area between Lincoln Avenue and Doolin Avenue west of B Street was hit the hardest.

A dramatic description of the event appeared on the front page of the Journal-Tribune the day after:

“The houses are in splinters,” said the article. “Only a few stone and brick houses were spared. Almost all of the homes in the direct path of the tornado are completely destroyed. Great trees as much as three and four feet in diameter were uprooted and twisted. Streets in the area were lined with trees and they were ripped to stumps. The funnel, estimated at about a mile wide, hit south of Blackwell and then came back down in the city and churned to the north, jumped the Chikaskia River, and hit farm buildings north of the city.”

In the days following the tornado, the newspaper would mobilize its workers to conduct a survey of the damage. The extensive report appeared in the paper's next Sunday edition, taking up most of the front page and nearly all of the second. Surveyors said that 85 structures were “damaged but occupied,” 70 were “extensively damaged” but remained “repairable,” and 190 were “completely destroyed.”

Homes and buildings were not the only things affected.

Broken water lines left homes without drinking water. But at the same time, few sources of water were readily available: consumption of river water, city leaders warned, could cause typhoid fever. Residents were encouraged to get vaccinations against the ailment.

Other types of infrastructure – phone systems, electrical systems, and natural gas lines – were knocked out and damaged.

To add insult to injury, two of Blackwell's main employers would be reduced to rubble. The Hazel-Atlas Glass Factory was demolished, and it would never again reopen. That cost the city nearly 200 jobs. The Acme Foundry, too, was destroyed, though it would eventually rebuild.

In total, the estimated cost of the damage was $12.5 million.

This damage, however, was material. It could only grow worse.

The headline stretched all the way across the front page on May 26: “AT LEAST 17 DIE IN TORNADO.”

In addition to wrecking homes and businesses, the May 25 tornado killed and injured hundreds of people across the region.

Around 200 more were injured.

It was a loss of life that was set heavy on the hearts of many.

Warren Bickford, who was the Journal-Tribune's city editor at the time, lamented in a front-page editorial the feeling of guilt he had for having been spared: “I've been close to death as a soldier, and Wednesday night I was flirting with the man with the scythe again, and I was frightened, both for myself and my family. We are alive, unhurt, but it's a thin line between life and death, and in the case of the wind Wednesday night, it was just the second house down from me blown off the foundation. … I opened the back door about three minutes later, and I heard it. It sounded like two freight trains bearing down on me. … As it was, [my family and I] were huddled under a mattress and furniture like so many others, but the wind spared my family and house, except for minor damage. … It's a miserable shame that everyone in Blackwell can't be as happy as we are today.”

That night, the lives of Blackwell citizens were forever changed. But as soon as the storm was gone, Blackwell began to rebuild.

Trucks from the Blackwell Fire Department raced to the east side of town as soon as a man reported to firefighters that the glass factory was fully engulfed in flames. But despite firefighters' best efforts, they were, as one reporter described, “helpless.”

The city's water distribution system was wrecked, and there was no water pressure on the east side. And to make matters worse, the Chikaskia River was flooding. Nevertheless, the fire was eventually extinguished.

Immediately after the tornado dissipated, city employees started to get public utilities up and going again. By the end of the week, the city's phone, electrical, and gas systems were back online.

City officials put out requests for aid, and they got it. In the following days, National Guard crews came with dump trucks to help clean up debris. Martial law was declared, and fire and police departments from across the area would descend upon the storm-wrecked town. Aid packages for local businesses would be offered, and organizations like the Red Cross provided shelter to those displaced by the twister.

One by one, homes were rebuilt. Lives began anew. And for at least 29 blocks, a new Blackwell – still here today – was born.

THE CALM AFTER THE STORM

In the years since the storm, Blackwell has had severe weather incidents. However, the city has been better prepared to handle them. Advanced weather technology makes predicting storms easier, and the city now has an entire department devoted solely to keeping the city afloat during severe weather. Firefighters and police officers alike take rigorous training on how to handle mass crises, and citizens are able to find the latest weather news at the touch of a button with real-time radar imagery.

Dayle McGaha, the Journal-Tribune's longtime publisher, noted these advances in 1989. Going beyond simply admiring the city's technological progress, however, McGaha taught his readers a lesson: you can never be too prepared.

“Blackwell has come a long way. … Our people are strong and persistent when it comes to rebounding from tragedy. Let's continue to be alert, cautious, and have definite plans on what to do if ever such a tragedy hits again. Thank God for many protective measures and capable, alert, weather-watching volunteers who have our best interests at heart.”

And thus was the story of the most catastrophic event in Blackwell's history: The Tornado of '55.