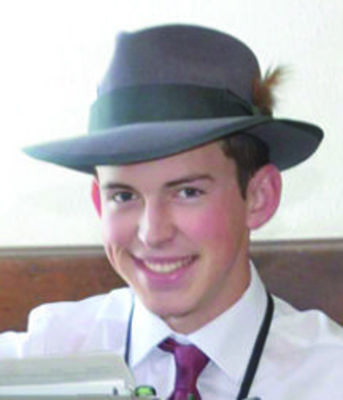 Blackwell has been hit hard by severe weather this year. Luckily, we are now more prepared to deal with it than ever before. Let's keep it that way.

On May 25, 1955, an EF-5 tornado wiped out major portions of Blackwell. From that day on, the lives of Blackwellites have been forever changed. But in a good way.

Looking back on the devastation spread by the tornado, it's easy to spot the reason why the damage was so horrible: we as a city were not adequately prepared for such a disaster.

A study administered by the Blackwell Journal-Tribune one year after the twister revealed our town's shortcomings. While it is likely that some people did not have enough emergency supplies set aside – and that our city did not have a modern storm warning system – the most glaring problem was that people thought a tornado just “couldn't happen here.” In fact, most people said in the survey that, as soon as they heard the tornado forecast, they unplugged their TVs and radios to keep them from being hit by lightning.

The belief that one “couldn't happen” was a common sentiment. But now, we know better.

Because we experienced a tragedy like that tornado, we learned not to ignore warning signs, and we learned the importance of having a city government that works to protect us. Thanks to the advent of the smartphone, one can now keep track of the storms on radars. Emergency personnel can use mass-warning programs to send out messages of impending storms to wide audiences. And we have a superb system of outdoor warning devices that are regularly tested and inspected to ensure that they are ready to work when disaster strikes. But these are only good if we use them. Listen to those warnings, stay tuned-in to weather stations, and keep track of storm movements on radar applications for smartphones.

Most importantly, our fire and police departments are now more well-equipped to deal with mass crises. Tools like the jaws of life and AEDS allow firefighters to perform life-saving work on patients. Also, first responders are able to network with other agencies in order to provide critical care during times of emergency. However, these preparations come a cost. It is neither cheap nor easy to staff as many first responders as we do, and maintaining mass communications programs can be difficult.

But thanks to the lessons we learned from that tornado, we know that these expenses are worth each and every penny. Just look to last week's storms. Without the aforementioned resources, what could have happened is left only to the imagination. Maintaining these programs is up to us and to our city leaders: It's our job to remind them that they should always prioritize spending on public safety over anything else.

But preparedness does not end with the fire department or news anchors. It's up to us as individuals, too.

Each year as storm season approaches, make sure that you have plenty of food and water to last you for at least a week during a time of severe weather. And by water, I'm talking about bottles, not the tap. Food should be non-perishable. Also, keep extra batteries and flashlights on hand, and always have an updated first aid kit available.

Most importantly, know where you're going to go if storms do strike. If you don't have a cellar or basement, go to the innermost room in your home with no doors and no windows.

And get there before the storm hits.

The importance of planning for emergencies can't be overstated. Even the slightest bit of preparation can mean the difference between life and death.

We can't control the weather, but we can control how we respond to it. My good friend Dayle McGaha, who used to be the publisher of the Journal-Tribune, put it this way: “Grim proof that odds are sometimes against you are forever evidenced by the 29 square blocks of our beautiful city bared, stripped of their beautiful trees and modern homes by 60 seconds of twisting death that fateful May night.”

Blackwell learned the importance of preparedness the hard way. Even if another disaster were to strike – though we pray one will not – we will be better equipped to handle it. Now, we have to keep up the good work.

The Boy Scouts said it best: “Always be prepared.”