GODZILLA: KING OF THE MONSTERS is a loud, beautiful love-letter to chaos 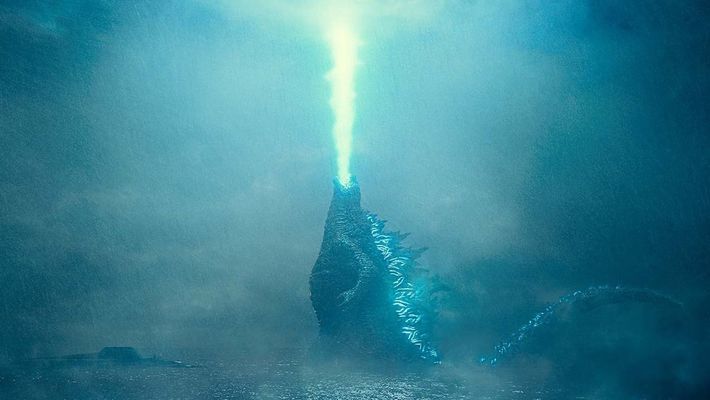 "Sometimes, the only way to heal our wounds is to make peace with the demons that created them."

These words from Japanese actor Ken Watanabe's wise and world-weary yet hopelessly hopeful scientist Ito Serizawa act as a moment of tear-jerking sincerity before GODZILLA: KING OF THE MONSTERS' emotional climax and, in a way, remind us all of the power and beauty that can come from a film about a towering atomic lizard battling against a fiery pterodactyl, a three-headed winged dragon, and a ethereal behemoth moth.

KING OF THE MONSTERS, Directed by the genre-savvy Michael Dougherty who directed films like KRAMPUS and TRICK R TREAT, is a 2-hour powerhouse of a film that turns the "men in rubber suits" of the iconic and sometimes silly Godzilla franchise into a CGI-heavy opera of striking, biblical imagery and echoes the same cautionary warning that the 1954 original roared about in a post-nuclear age: if mankind can't save itself, the world will take herself back...by force.

Picking up in the devastation of San Francisco from 2014's GODZILLA, we meet Dr. Emma Russell (Vera Farmiga) and her husband Mark Russell (Kyle Chandler) as they frantically search for their son in the wreckage of the city. Their young daughter Madison, clutched in her mother's arms, looks up as her parents realize their son is dead and the young girl locks eyes with Godzilla as he retreats into the ocean.

Years later, Madison has grown into a young adult played by "Stranger Things" icon Millie Bobbie-Brown and her parents Emma and Mark have separated, unable to live comfortably after the loss of their other child. Her mother, we find out, is a chief scientist at MONARCH- a shadowy organization dedicated to the research of the gigantic beasts known as 'Titans' that have begun to emerge in the wake of Godzilla's 2014 appearance- and Dr. Russell has created a device known as The Orca that can, in a sense, communicate with these monsters.

After a towering egg is hatched in China, we see a larvae that will become Mothra, and at that same time an Eco-terrorist named Jonah Alan (a sinister Charles Dance) kidnaps Madison, her mother, and The Orca in an attempt to awaken these sleeping Titans and "reset" the Earth that we humans have destroyed through our pollution, wars, and industry. Soon, they awaken "Monster Zero", a terrifying creature buried under the Antarctic ice...a creature we will come to know as "King Ghidorah"...a rival predator to Godzilla. The latter, of course, comes out of his 5-year slumber to assert his dominance and what follows is a manic spectacle of gorgeous mayhem.

Written by Dougherty and frequent partner Zach Shields, KING OF THE MONSTERS shares more in tone with 2017's KONG: SKULL ISLAND than the dour 2014's predecessor. It's a fun movie that isn't light on laughs or cheese but also knows when to cease both and allow the characters- gigantic and small- to have their time. It's a movie that will make you grin as often as it might make you sniffle, and that's the best kind of entertainment.

The cast is full of recognizable faces that all have a genuinely great time and sell their roles- as shallow as some may be- with the upmost sincerity. Kyle Chandler is a stoic and hard-jawed as ever, possessing the same sort of wholesome grit and determination as Coach Taylor from "Friday Night Lights", Charles Dance as the steely-eyed antagonist is of course a natural expansion from his Tywin Lannister character he became so well-known for through "Game of Thrones", Vera Farmiga's Dr. Russell is a truly sympathetic villain in this piece and allows Farmiga to draw in a lot of her best parts from other iconic roles she's played through her illustrious career. The real star here, however, is Oscar-nominee Ken Watanabe who gets one of the most passionate and tear-welling scenes I've seen this year with the big man Godzilla himself that I won't spoil.

The action and the sheer size and spectacle of the film is enough to get your ass in the seat, though. The human drama comes second. Dougherty's ability to frame and color a shot is profound, and with the help of cinematographer Lawrence Sher everything on the screen looks like it could come off the wall of an art-gallery. The special effects work here is phenomenal, and these giant monsters have never looked better. The roars and cries of Rodan, Godzilla's trembling bellow, Ghidorah's monstrous and sinister cries, and Mothra's maternal and almost calming belts draw as much emotional stimuli as the human characters do- sometimes even more effectively.

When the Titans clash, your eyes will widen and your teeth will clench to a shatter as these biblical beasts beat each-other across cities and oceans. You will not experience anything like this for the rest of the year.

You can, however, book your tickets to 2020's GODZILLA vs KONG which will act as a sequel to the aforementioned SKULL ISLAND and this monster-mash. I already did, and I'm taking bets that my man Kong beats this lizard senseless.