Review: ROCKETMAN is an electric fantasy musical to make you weep and sing 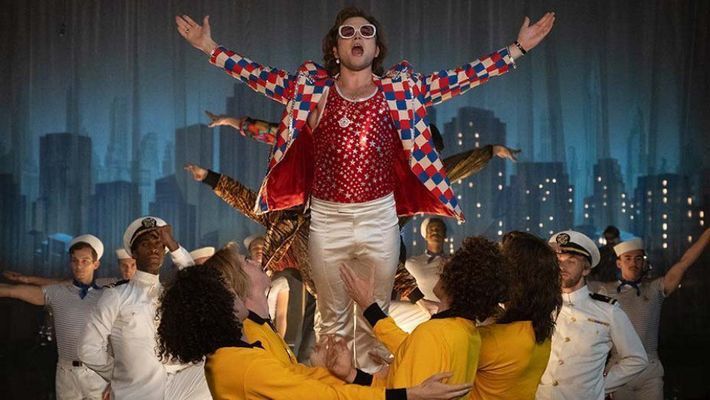 “Real love is hard to come by, so you find a way to cope without it.”

This weekend saw the release of much-hyped musical fantasy ROCKETMAN, detailing the meteoric rise to fame and subsequent crash to Earth of Reggie Dwight- more famously known as Elton John.

Through the course of two hours the audience sees a gifted child from Pinner in the United Kingdom become a worldwide sensation and deal with the pitfalls of fame and fortune as he's carried from one cratering life event to another through lines of cocaine, bottles of vodka, and hedonistic urges to fill the holes of emotional abuse from childhood to his life as an adult.

Directed by Dexter Fletcher- who infamously stepped in for Bryan Singer on last year's Queen biopic BOHEMIAN RHAPSODY midway through production- the film is written by Lee Hall (Billy Elliot, War Horse) and the two combine their passions to create something that is not only truly unique but exceptionally heartfelt. Brought to the screen through the eyes of cinematographer George Richmond (The Kingsman duology, Tomb Raider) the movie is poignant as often as it is intentionally gaudy, and feels like something completely genuine that performs a high-wire balancing act of surrealist fantasia and grounded bio-drama.

The story of Elton John's life is told through a stint in rehab as star Taron Egerton fights and swaps between bouts of misty, bloodshot, eyes and quivering lips; hand-waving chuckles of gaiety; and throat rupturing rage. The first musical number finds Elton reliving his boyhood in his 1950's neighborhood with a Mayberry-esque simplicity contrasted by the harsh lyrics to “The Bitch is Back” performed simultaneously by Egerton and Young Elton played by delightful newcomer Sebastian Rich.

It is this first musical number that really sets the tone for the film as adult Elton stands in pronounced color wearing a flashy, glittery, red and orange jumpsuit with ruby-tinted glasses, a pointed tail, demon wings, and sinister horns while he watches his past play around him. This one scene is so overwhelmingly powerful that I'm not afraid to admit I started to cry just from the weight of it all.

We meet Elton's mother, Sheila Dwight, played by an against-type Bryce Dallas Howard (still as beautiful as ever) and discover the emotional neglect and verbal abuse brought on by his father- a cold and unloving turn by Steven Mackintosh- before Elton grows up in a wild piece set to “Saturday Nights's Alright” that allows director Fletcher to really dazzle the audience with an amazingly physical dance number through a chaotic carnival. This is also the first time the audience really gets to hear Taron Egerton's singing voice.

The key players then filter in with Elton's longtime friend and collaborator Bernie Taupin (a stellar Jamie Bell) and then his lover-turned manager-turned enemy John Reid, played here by a devilishly handsome and equally venomous Richard Madden, taking over the same character fellow “Game of Thrones” actor Aidan Gillen played in last year's BOHEMIAN RHAPSODY. The performances are all-around incredible and the actors of course all can flex their pipes as well as they can their theatrical range.

Speaking of star Taron Egerton's voice, he already looks the part, but does he sound it? No. Egerton doesn't try to imitate Elton, and the film is better for it. He has an amazing voice that is as unique to him as the real life Elton's is to himself, and instead of being dubbed over unconvincingly like Freddy Mercury to Rami Malek, Taron is allowed to interpret the songs to fit his vocal range, and the results are incredible. Pieces like “Tiny Dancer” are re-arranged and toned down to fit the mood, and “Crocodile Rock” becomes an entrancing dreamlike ballad during Elton's first performance at the Troubador in Los Angeles.

“Goodbye Yellow Brick Road” might be the film's highlight, and that is saying a lot because the entire soundtrack glitters, shines, and entrances much like Elton's fabulous wardrobe. The titular piece, “Rocketman”, is presented in an incredibly rich number after Elton overdoses on a wild mixture of blow, pills, and alcohol during a party in his home. It is magnificently shot and tells it's own heartfelt story through imagery as the song tells another one almost entirely- two individual tales about Elton's internal and external struggles that share the same erratic heartbeat.

The film does the impossible by keeping up it's infectious energy through the near two-hour runtime and it pulls off the even more unlikely hurdle of continuously hitting the audience where it hurts. When you think it can't get any more depressing for Elton, you get hit like a truck. Taron Egerton is in definite contention for some awards buzz, and two particular scenes involving his father and later his mother, will have you reaching for the tissues you might have buried in your popcorn bag.

The movie of course isn't all just flash and style to bring John's glamorous life to the screen. The ending ties up his struggles of mental abuse, self-harm through substance abuse, and fading creative drive into an incredible (and emotional) scene where he confronts (physically and mentally) the ghosts of his past and those who have both wronged and helped him with a climax that is breathtakingly touching and extremely mature, carrying a message that the audience wont leave the theater without while also adding new depth to the foot-tappingly joyful “I'm Still Standing” that acts as the closing number.

ROCKETMAN is entrancing, colorful, and wild. A cocaine induced, boozy fantasia about the power of creativity, the need for forgiveness, and the power of friendship. This is one of the best movies you will see this year, and will go down as a pinnacle of musical filmmaking.