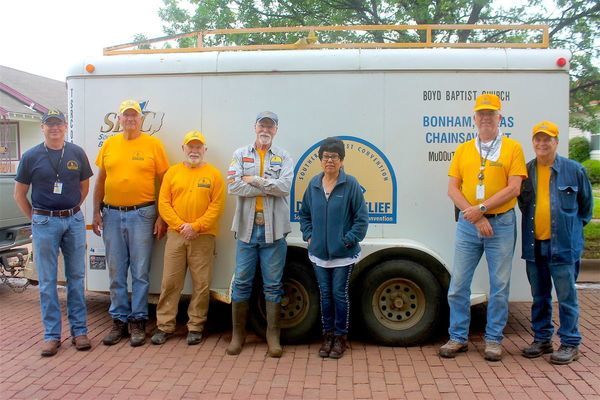 Members of the Immanuel Baptist Church have been helping the victims of last month's heavy flooding with the assistance of the Southern Baptists of Texas Convention's Disaster Relief program, according to Matt Smith, the senior pastor at IBC.

Smith and the SBTC crew were busy at First Street and Doolin Avenue last week assessing water and mold damage at the Blackwell Tabernacle Church. The church was flooded by the rising waters of the Chikaskia River on the north side of Blackwell.

“The Southern Baptists of Texas got here just a day ago, and they immediately began to help around town. They have an entire mud-out team to help clear basements and homes of water and mud that may have gotten in, and they have been using various tools to kill the mold that follows,” Smith said late Wednesday afternoon as he and the SBTC crew moved their disaster-relief trailer to a home on the north end of town, the area that was most effected by flooding.

“They brought in a shower trailer and laundry trailer as well, which we have set up at the IBC church on 13th for the benefit of the community that needs it,” Smith said. “We're all part of a nationwide network that has global goals helping communities, homes, and business that have been impacted. I've done work in Texas and coastal hurricane areas with them as well as in foreign countries. Anyone who needs us can contact IBC at 580-363-5058.”

Mike Jansen, a crew director with the Southern Baptists of Texas Convention, said that the organization's goal is to spread Christ's message through helping others regardless of denomination, political views, gender, race, or nationality.

“Our aim is to spread love and care through Jesus Christ,” said Jansen. “I met one man in Texas, I believe, who had his home ravaged by floodwaters, and he asked who we were 'with.' I told him, and he said we wouldn't be helping him because he identified himself as an atheist. … I simply told him it didn't matter. He needed the help, and that's what we're there for. I meet people who want to talk about Jesus, church, and God, and I meet people that don't. It's as simple as that. We're here to help, no matter what.”