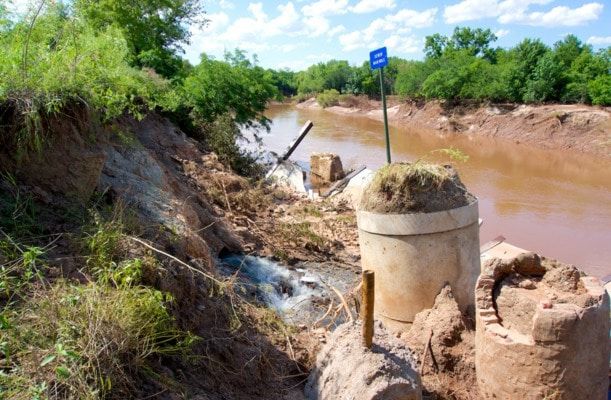 The Blackwell City Council held an emergency meeting at 4 p.m. Friday afternoon to discuss a recently-discovered break in a city sewer line, causing raw sewage to be spilled into the Chikaskia River. The damage was caused by flooding from that same river.

City Attorney Bryce Kennedy said during the meeting that raw sewage dumping into the Chikaskia counts as an "unforeseen circumstance" that puts the public's health and safety in danger. Because the situation is an emergency, the City Council was allowed to award an emergency repair contract to Luckinbill, Inc. out of Enid. Jim Hoos, the city's water department supervisor, recommended the company because it has previously worked with the city.

According to Kennedy, the riverbank had eroded severely and broken the line. It was “very much an emergency,” as defined by city policy, he said.

"We contacted the press and gave as much notice as possible on our webpage and Facebook [of this emergency meeting], " Kennedy said.

Under state law, a municipality can waive normal bidding procedures during an emergency. Mayor T.J. Greenfield said, "Bids can be waved if an emergency is declared, and raw sewage dumping into a navigable river is definitely an emergency."

Councilman Jon Webb asked if Luckinbill had previously done work on sewer systems. Kennedy replied that Luckinbill is a “major company out of Enid” with a wide range of skills and qualifications.

Smith said she had worked well with the company in the past.

"This has got to be fixed," Kennedy said. "Luckinbill will work on a temporary fix first and then step back and see what we need to do."

Smith said Luckinbill had been "all over the state,” adding that Hoos was assessing the situation with the company. Smith also provided pictures of the ruptured line to the Council.

Representatives from the company told the city that the repairs would cost about $25,000 initially, but that they could not determine what the final cost would be.

"This has deteriorated a significant amount of land, and with the amount of sewage pouring out – and with the Department of Environmental Quality being notified – this is major, so we need the Council to move forward to stop this," said Smith.

Greenfield agreed, saying that the situation calls for an emergency repair.

Webb moved to approve the emergency declaration, with Councilman Tom Beliel giving a second to the motion. It was approved unanimously. Councilman Steve Marquardt was absent from the meeting.

Since Friday's meeting, a temporary line has been installed, stopping more sewage from going into the river.