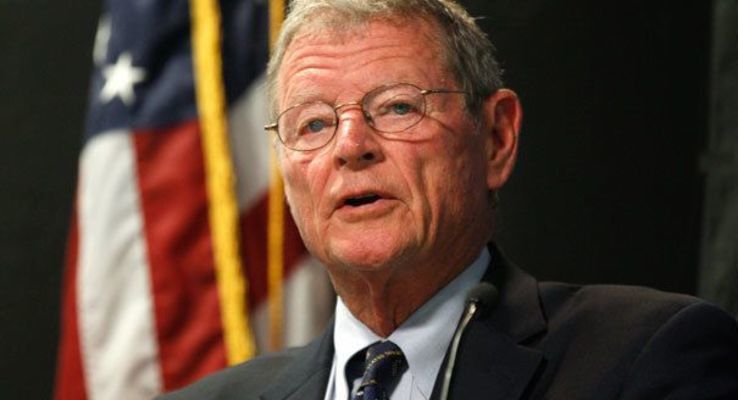 On Friday, U.S. Senator Jim Inhofe flew into the Ponca City Regional Airport to talk to members of the media about flood recovery efforts. While he was there, I spoke with him about the latest developments on the topics of military spending, tariffs, and immigration reform. Let's take a look at what Inhofe had to say.

Q: Thank you for your time, Senator Inhofe. The National Defense Authorization Act markup has been completed, and it was passed out of committee by a 25-2 vote. The act is the set of laws used to fund the United States' military and security measures. The markup is the process by which funding for the act is increased or decreased, and you chaired the markup committee. What parts of this year's markup are you most proud of, and how does this plan stand out from the markups of previous years?

A: Our previous president destroyed the military. If you need proof of that, I can give you the documentation on total defense spending in fiscal years 2010 and 2015. During that time, he cut the military down by 25 percent. We allowed China and Russia to get ahead of us. So, right now, one of the major things that we are doing between our committee and President Trump is rebuilding the military. That is what took place a few days ago. I'm most proud of the fact that we are restoring military funding to pre-Obama levels.

Q: Do you think the markup will pass both the Republican-led Senate and the Democrat-led House?

A: What we have to do after this is, take that bill to the Senate floor and pass it on the Senate floor. Then you go into conference with the House. Now, the problem with the House is that they are so far behind. I'm not saying this because it's a Democrat house, but they have just not done anything with [the markup]. They don't think that they will get their House bill done until some time in August. So they're not even participating now. But we are getting it done. The reason I say it will get done is because we have gotten it done every year for 54 years.

Q: President Trump has announced that he will impose a 5 percent tariff on imports from Mexico. In your opinion, are tariffs good for our economy or not? What are their repercussions, if any?

A: We're going back to 1994, when we had the first bill with the United States and Mexico. At that time, I actually was there and I voted against it, mostly because of the transportation provisions. But what we have allowed Mexico to do is very similar to what we've allowed China to do, and that is being in a position where we have a trade deficit with them, and they are doing things that are not in the best interest of our country. The thing that the president is fighting right now with them is all of those who are coming across the border. That's what we are correcting right now. I believe tariffs are beneficial if they accomplish a purpose. With China, they are accomplishing a purpose. I think it will with Mexico, too.

Q: On May 7, you and several other senators spoke with President Trump about the administration's plan to overhaul legal immigration. Does this plan stand a chance in the divided Congress?

A: No. He was talking about trying to gear people who come here legally to bring talents with them. Right now, we need engineers in America. China and Japan both have more engineers than we do. The problem with that is that we have a bicameral system. We have Democrats who would oppose that only because they hate Trump with such a passion that they will oppose anything that would be lasting. I said to the president, “This [meeting] is great, except you have the wrong people here. The people who are going to oppose it are going to oppose it, and that's because they hate you.” He said he knows that.

Q: Do you believe that there are any compromises that could be made for the president to get a reform bill passed on either legal or illegal immigration?

A: We could do that, but it's a partisan problem. As you know, Obama was encouraging people to come across the border legally or otherwise. He actually had communications going to El Salvador, Nicaragua, and places down in Central America encouraging people to come to this country. And there's a political reason for that. In his opinion, they're all going to get up here and vote Democrat. I think it's funny because [that idea] is wrong. The Democrats are pro-abortion, and these are almost all Catholic people. So you're not going to have that effect, in my opinion. Illegal immigration reform, I think, we are going to get through. We have so many people now who know that terrorists are getting across the border.