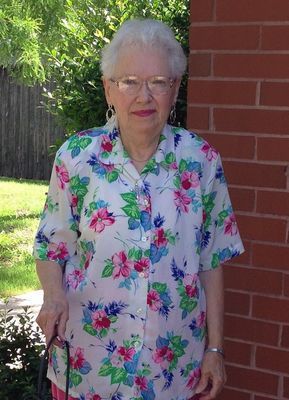 Vivian Lalene Crowley Reese, longtime Blackwell resident, went to be with her Lord and Savior Jesus Christ on May 15, 2019 at 4:28 p.m. at Willow Haven Nursing Home in Tonkawa, OK after a short battle with sepsis, pneumonia, and heart failure.

A Celebration of Life will be held at 1 p.m. on Saturday, June 15 at theFirst United Methodist Church of Blackwell with Reverend Clifford Johnson officiating. Burial will be in the Blackwell Cemetery.

Vivian Ialene Crowley Reese was born on November 24th, 1934 in the old hospital at Blackwell, OK to William Herschel Crowley and Bertha Elizabeth Lawrence Crowley. She was the older of two daughters.

Vivian attended grammar school with her sister Virginia at the Braman Elementary School. The family moved to Blackwell in January, 1947. Vivian ultimately graduated from Blackwell High School class of 1952 and was a loyal “Maroon” actively participating in class reunions while living in Blackwell.

Vivian was a gifted pianist, organist, and soloist even early in her youth. She played and sang for services at the old United Methodist Church and won high school piano contests and awards. She continued her musical endeavors in piano and organ as well as directing the choirs for church congregations in Oklahoma, Kansas, Virginia as well as in Japan.

After high school graduation, she attended the University of Kansas in Lawrence, Kansas majoring in music. However, prior to sophomore year, she met Howard Gregg Whatley of Hutchinson Kansas. On September 6, 1953 they were married at the First Baptist Church in Blackwell with Howard’s father Reverend Howard Hiram Whatley officiating. Vivian left school and while Howard continued to earn his BS Degree the couple had two sons, Gregg II on October 14, 1954 and Randy on December 19, 1955.

Upon his graduation, Howard became a career army officer. The couple had their third son Brian at Ft. Eustis, VA on May 17, 1959. For the majority of their 20 year marriage they lived near Ft. Eustis in Newport News, VA. The family also lived a year back in Blackwell in the early ‘60s while Howard was in Vietnam. Additionally, they resided for a year in Leavenworth, Kansas as well as a year at Camp Zama, Japan.

After their union ended, Vivian moved back to Blackwell in 1976. She worked at various retail locations in Blackwell, until she married Clarence Leroy “Pete” Reese on March 4, 1982 residing at the family farm. In addition to farming efforts, Pete and Vivian were very active members of the First Christian Church in Blackwell until Pete’s untimely passing on July 29, 2003.

Vivian’s calling throughout life and especially later in life was to share the Gospel of Jesus Christ through active participation in her church congregations, individual and group bible studies, conducting music services at the Hillcrest Manor Nursing Home in Blackwell for some four years, and through intercessory prayer for individuals, her community, and the nation. She even held a small prayer meeting in her room at Willow Haven two days before her passing. She was known as a true prayer warrior.

Vivian’s Godly presence will be missed by all whom she touched. Memorials can be made in her name to the Blackwell Tabernacle, 1013 N 9th Street, Blackwell, OK 74631. Arrangements are under the direction of Trout Funeral Home & Cremation Service of Tonkawa.