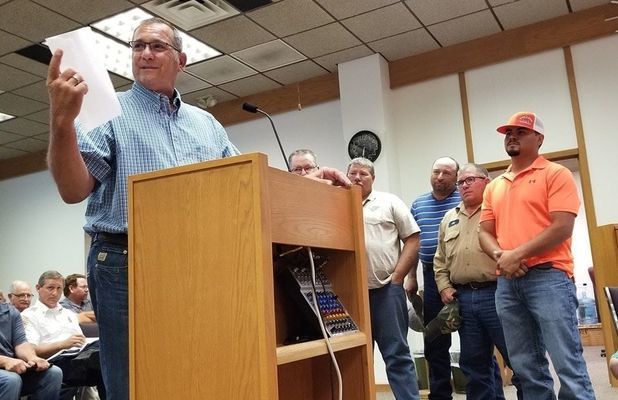 The Blackwell City Council met for nearly five hours on Thursday night to discuss the city's budget for the upcoming fiscal year and to approve re-roofing projects for several city-owned buildings.  The first item on the agenda for the meeting was to hold a discussion on the city's general fund budget for the 2019-2020 fiscal year. The budget was prepared by RS Meacham CPAs and Advisors, the group that served as the city's accounting firm until the Council voted to end the city's contract with the firm late last month.

The 40-page budget was handed out at the meeting, and it has been made available online. At the meeting, officials noted that the city's budget reflected a loss of $758,874 between the general fund and the Blackwell Municipal Authority. Also, in terms of “day-to-day operations,” the city is over-spending, officials said.

A statement included in the budget packet read: “In Fiscal Year 2019, a plan was established to balance the budget in three years, [and] the Fiscal Year 2019 budget reflected the first step in … the objective. However, the proposed budget reverses decisions made in prior years. … Instead of taking a step forward … this budget moves the city backwards.”   City Manager Janet Smith said:  “The first year of the three year plan proposed by RS Meacham, shows actual spending numbers to have produced a combined net-loss of $951,000, contrary to the prediction of a net revenue of $192,436. [W]ith the adoption of the proposed FY2019-2020 budget, the expected loss for the upcoming fiscal year is planned to reduce by $192,136, resulting from a combined loss of the City and BMA funds of $758,874. Therefore, with the proposed budget, city management is making progress in reducing the losses incurred from a pattern of overspending for the last several years.

According to Smith, the 2018-2019 budget was projected to have a surplus – but now, the city is facing a deficit of nearly $1,000,000.00 . Smith said department supervisors have “done a great job” of keeping costs down, so the discrepancy “must have been a mistake in the budget numbers calculation.”

Smith informed the Council that she did not know what the discrepancy in the budget was because the budget was prepared in the offices of RS Meacham CPAs and Advisors, meaning Smith and city officials could not access the spreadsheets the firm used to calculate the budget.   Mayor T.J. Greenfield called the loss “healthy,” though he added that it was his only problem with the budget. Councilman Jon Webb said he would feel “more comfortable” with the budget if the Council held another budget work-session.

While the public hearing at the meeting was meant to discuss the budget, input from members of the audience slowly devolved into discussion of “apples, oranges, and bananas.”

The Council ultimately determined that another work-session would be held Monday, June 17 at 12 noon.

Frank Crawford of Crawford & Associates, P.C. was present at the meeting at the request of Smith to discuss the budget with the Council.

According to the Crawford and Associates website, the 25-person firm was established in 1984 with a “mission of promoting accountability and transparency in state and local government in an effort to help maintain and enhance public trust.” The firm, based out of Oklahoma City, has a clientele of “state and local governments and other organizations around the world.”

The firm specializes in budget preparation, financial statement preparation, budget monitoring, general accounting, and internal auditing, among numerous other services, according to its website.

During the meeting, the Council heard from Blackwell Youth Center Director Denise Hindman, who spoke to the Council about the state of the youth center's roof.

Hindman said that the roof at the youth center started to leak following heavy rains last month.   “This is where my heart is – with these kids – because no one else will take them,” Hindman said. “It would mean a lot to me if you came to the youth center. Thank you for hearing me. Please come out there, and please come look at it.”

Following Hindman's report, the Council voted to approve a motion to solicit bids for roof repair. The city will seek bids to repair or replace the roofs on: the youth center, the city water treatment plant, the upper roof and barreled roofs on the city armory, and the Top of Oklahoma Museum.

Also at the meeting, The Council voted to approved Ordinance 2019-09, which will turn the Blackwell Tourism and Development Board into an official city board. Officials said that this decision will help the board further increase tourism in the city, as money from the city's lodging tax can be spent by the board. Loftis & Wetzel Corporation was hired as the city's insurance broker, and The Council voted to table a measure defining the appropriate rules of decorum and procedure for City Council meetings.

The Council also tabled the funding agreement with the Top of Oklahoma Museum Board; and Ordinance 2019-10 was approved- it defines where trucks may or may not be parked at the county fairgrounds. It also allows the city to put up signs regarding parking, and implements penalties for drivers whose vehicles cause damage to roads at the fairgrounds.

Directors of various city departments presented their monthly reports to the Council. A big point of conversation among the department reports was flooding in May that resulted in power outages, traffic jams, and the death of a local man who was swept away by floodwaters.

Greg Sixkiller, the supervisor of the city's electrical department, was named Employee of the Month for the city. Smith thanked Sixkiller and his workers for their efforts to restore power during a recent 24-hour power outage. Sixkiller gave an emotional speech during the meeting in which he thanked the efforts of his employees.