Braman Board of trustees to hold budget hearing 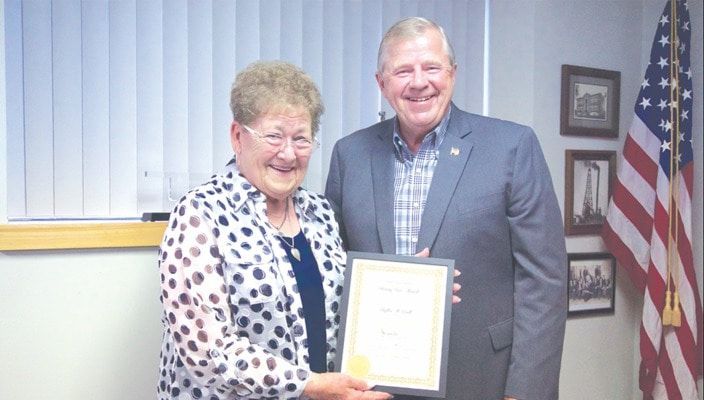 If Braman Mayor Marv Sandbek could use one word to describe the problems facing the town of Braman, he would likely choose the word “money.”

At the Tuesday, June 4 meeting of the Braman Board of Trustees, money was the name of game. The board voted to hold a public hearing on the town's budget, and trustees discussed whether or not to access one of the town's certificates of deposit in order to pay back debts and fund an audit of the town's 2017 - 2018 budget. Trustees also enlisted the help of a member of the community to get the town's bookkeeping “in order.”

The need to complete the audit comes weeks after the town's clerk abruptly resigned, leaving trustees without access to important financial records. Now, town leaders are working to sort out what money the town does and doesn't have.

Here's what you need to know.

Sandbek said the town's budget for the 2019 - 2020 fiscal year is a “complete rewrite” of the last year's budget. This year, the town will shoot for a $17,000 surplus. Sandbek said the surplus sounds “modest,” but he said that it “beats overspending.”

The town will hold a budget hearing Monday, June 17 at 7:00 p.m. The meeting will be held at the Braman Town Complex, located at 302 Broadway Avenue in Braman. At the meeting, the town will present its budget resolution for the upcoming year.

At the meeting, the board discussed whether or not to access two certificates of deposit that the town currently has. One CD has a balance of $118,000, and another has a balance of approximately $8,700.

Sandbek said the larger CD was created “years ago” and that accessing it would be like “breaking open a time capsule.” The smaller CD was created to help operate the town's swimming pool, which was closed last year.

The board considered opening up the CDs as a way to help pay for an audit of the 2017 - 2018 fiscal year, which the town must complete in order to be eligible for grants that could be used to repair its infrastructure. And there is another reason the trustees are considering using funds from the CDs: to start paying the town's unpaid bills.

According to Sandbek, an audit of the 2017 - 2018 fiscal year could cost as much as $70,000, though that figure could decrease depending on the type of audit the town chooses to use.

As far as unpaid debts, Sandbek is unsure just how many bills the city may be faced with in the coming months. But one of those bills was listed on the agenda for Tuesday's meeting: an overdue payment to Dice Roofing in the amount of $5,200. That amount may also decrease, and the bill will not be paid until the final amount is determined.

Sandbek said the town will pay its bills when it can, but that it needs money to do so in the first place.

“Well, you don't have much [money] to work with, and the audit that we're having done … I don't think we can do it for free. So I really don't think we have much of a choice [but to access the CDs],” she said.

“We've taken a look at getting our bills up to date, being current, and financing the audit we'll need to do. … [The audit] is a money-generating activity. My experience is that you have a return on that investment far greater than your investment. This will open up sources of money that are sitting out in the state of Oklahoma right now that are available almost on request,” Haynes said.

Sandbek asked Haynes how much money the board should take out of the larger CD, and Haynes recommended that the board first find out exactly what an audit will cost before allocating any funds for one.

“You may need to call a special session. I don't think you're in a position tonight to say, 'Let's dedicate this amount of money to do that.' You have the money, it's available, and I would pass this to the next meeting or the special meeting to present a formal plan to the board on what money needs to be used on unpaid bills and then what money needs to be used to fund the audit,” Haynes said.

Ultimately, the board took no action on accessing the CDs at the meeting, but trustees did say they want to keep the smaller CD in tact in the event that the town can one day reopen the pool. The board will discuss the topic again at a future meeting.

The town of Braman will have to have an audit of the 2017 - 2018 fiscal year. But that audit can't happen until the town's books are in order.

The town's financial records are currently being examined by Crawford and Associates, P.C., an Oklahoma City-based accounting firm that has also assisted the city of Blackwell with its own budget in recent weeks.

The exact problems with the town's books are still being uncovered, town leaders say. But merely “cleaning up” the books to where an auditor could use them could cost $20,000, according to Sandbek. That's an amount of money he says the town of around 200 people doesn't have available.

Sandbek said that the town will enlist the expertise of Sally Johnston, a Braman resident who has come in on a volunteer basis to begin examining the town's books, in order to help the town better understand what its financial “picture” is. Johnston previously served as the city manager of Blackwell.

“She has been in here on a volunteer status for the last five or six days, and I cannot believe what she pulls out of these files. And they make sense,” Sandbek said. “She's putting this puzzle together. She knows there's stuff missing, and she can tell you exactly what's missing. I am pretty confident that Sally can do what Crawford can do. And we're talking volunteer. My position on that is to give her a shot.”

Ultimately, the board took no action on whether to hire the Crawford firm. The item will be discussed more at a future meeting.

Trustee James Lunn was absent from the meeting.