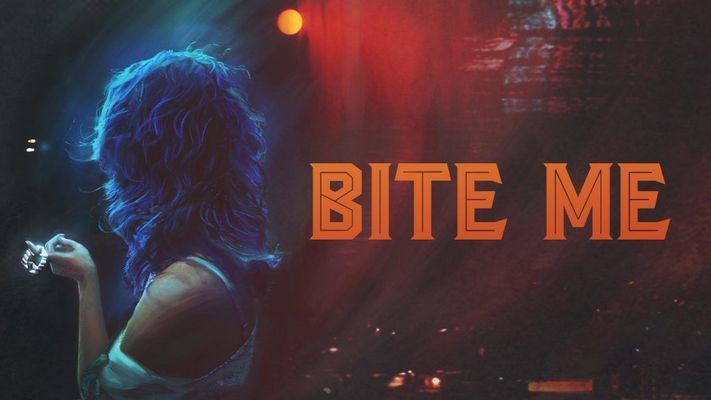 “You make me want everything I thought I was better than, you make me feel like all that garbage might be enough.”

The Blackwell Journal-Tribune got a special preview of the new indie film BITE ME this past week, with an interview from the film's lead actress and screenwriter Naomi McDougall Jones available to read online right now, along with this review.

Those who wish to see the film in theaters can see it July 16 in Wichita at the Mamafilm Microcinema in Revolutsia (2721 E. Central, 2nd floor) by booking online. BITE ME is also available to watch digitally through See & Spark, Google Play, iTunes, and Amazon.

BITE ME is billed as a subversive romantic comedy, and hails from director Meredith Edwards and writer/star Naomi McDougall Jones who leads here as Sarah, a real life vampire, belonging to an alt-culture of individuals who drink actual blood for energy and sustenance. Sarah's life, however, gets upended when one of their own goes on a reality TV show and puts the entire vampire religion in the national spotlight.

Thanks to this, the IRS tasks quirky British auditor James (Christian Coulson) to take a look at the vampiric church's books to see just how “real” their organization is. Of course, the investigation causes sparks to fly in what ends up becoming a heart-warming indie darling about individuality, happiness, and a saga of accepting differences.

Running at just under an hour and-a-half, Jones' tight script doesn't have the time to bog the audience down in what most have come to expect from the era of “socially aware” honor and genre films- which isn't a bad genre by any means- but at BITE ME's mascara covered, fish-net wearing heart is a whimsical story anchored by the strong performances and undeniable chemistry within the leads.

Director Meredith Edwards directs with tight close-ups and has a keen eye for intimacy both spacial and emotional. She is known for winning the Canada International Film Festival and Cape Fear Independant Film Festival's Rising Star and Best Female Director awards for her 2014 drama IMAGINE I'M BEAUTIFUL, where she worked with Naomi McDougall Jones. Jones, as mentioned, stars with a vulnerable voice and expressive eyes that betray her character's fierce personality, loud blue hair, and Mike Tyson-inspired facial tattoo- the latter is played on the fence of a gag and a genuinely heartfelt piece of expression.

English thespian Christian Coulson, co-star, might be most recognizable as Tom Riddle in HARRY POTTER AND THE CHAMBER OF SECRETS or as Damien in the TV series NASHVILLE. His seemingly boring and mundane IRS agent James quickly and understandably falls in love with the out-going and eccentric Sarah who inspires him to start expressing himself more than he ever dared to.

He is undeniably charming and his banter with the initially cold Sarah soon sees both of them develop naturally and co-efficiently.

James lives inside of himself after leaving his homeland Britain to escape an absentee father, an overbearing mother, and a failed marriage while Sarah herself has been rejected by her parents and lives emotionally shut off from a failed marriage of her own. Coming together, they soon realize how impossible it is to take themselves apart.

There's an extremely touching moment, maybe one of the film's bests, when James and Sarah are about to have sex for the first time and she discovers a stuffed robot that he's kept since he was a child. It allows fantastic moments from the two actors who find a lot to express with only trembling words and puzzled looks, filling the audience in on 20 or so years from each respective character in a matter of seconds. It's a great scene that walks a tightrope juggling sex scene, human drama, and will-they-won't-they tension.

Another superb layer to the film is the relationship Sarah has with her roommates Lily (Mahira Kakkar) and Chrissy (Naomi Grossman). The former plays a Muslim-Vampire which adds an interesting scene that the horror genre, specifically vampires, seem to gloss over which is if there's a boundary between vampirism and religion. The latter, Chrissy, is played by "American Horror Story" alum Naomi Grossman and has a heart as big as her smart mouth, and while she is a great friend to Sarah she comes across as a more believable "tough love" friend than what the romantic comedy genre might be used to, making it more believable and a more welcoming relief from the stock usually found around these films.

I mentioned earlier that the film that the film doesn't “bog down” the narrative with any obvious social themes, but that doesn't mean they're absent. Infact, the opposite. Centered around BITE ME's romcom rave attitude is a genuinely kind hearted and tastefully treated message of acceptance. James and Sarah are initially hesitant of each other before they open up, and by the end of the film we see James' older, religious roommate (and co-worker in a hilarious running gag) lead her prayer group in a mock battle against Sarah's vampiric brothers and sisters. While it is played for laughs (and really is quite funny) the film never goes above or below any group in question to condemn anyone, and by the end his sullen roomie has even seemed to find love in the form of an older male vampire!

BITE ME is a quirky, heartfelt, rom-com that sprinkles blood and black eyeliner on a typical genre picture, and is well worth the watch, especially considering the director and lead starlet seemed destined for big things.