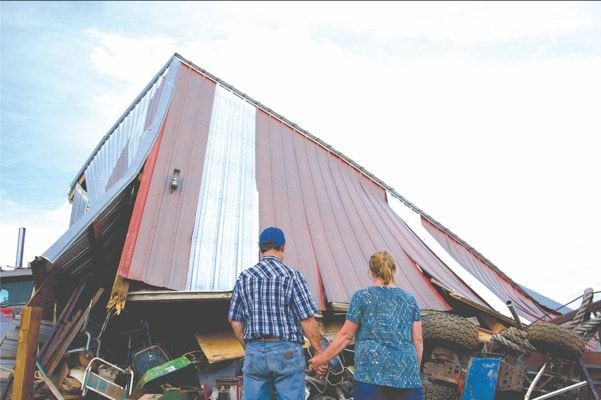 Her sullen eyes showed her what she did not want to see: The scene was different.

To the north, the pen where she kept her dogs was lying on the ground in pieces. To the south, part of the roof of her home had a hole in it. To the east, the large barn was knocked over on top of a semi truck. And to the west, limbs were snapped off of trees.

“It's very overwhelming,” she said. “ You don't know where to start.”

For Shirlene and her husband, Kendall, finding that starting place hasn't been easy – but they are thankful to have had help getting there.

Early Sunday morning, what some believe to be a tornado swept through the Whittingtons' farm just a few miles east of Deer Creek in Grant County, taking out tree limbs, smashing their barn, and flooding the living room of their home.

The storm passed through at approximately 4:55 a.m. It woke Shirlene up.

“It sounded like a massive train coming,” she said. “It woke me up, and I thought a tree was falling on the house. I ran out of my room and started seeing the damage, but I didn't know that the shop had been hit until it was lighter outside. I heard water coming in the house.

“It was scary when it happened.”

As Shirlene recounted the morning's events, Kendall walked outside, softly taking Shirlene's hand into his own. The couple walked over toward the barn.

Underneath its fallen roof sat a car, a semi-truck, a four-wheeler, a hay-baler, bicycles, tools, and family heirlooms. Among the wreckage, Christmas decorations and newspaper clippings stood out like lighthouses in a winter blizzard.

To Kendall, it was mere circumstance that so many things were trapped.

“Like anything, it just was in the wrong place at the wrong time,” he said.

By Kendall's standards, there were several things weren't in the right place at the right time that day. But there was one thing that was: Help.

“He asked, 'Where do you live at?' Nobody knew it had happened,” Shirlene said. “He wanted directions to us, and he came. … That's when it started rolling.”

The director called a home restoration company from Oklahoma City to clean up the family's living room. Soon after, other volunteers started showing up to remove downed tree limbs and pick up items that had been thrown around the yard.

“I'd say we had 10 to 12 people here,” Shirlene said. “Some neighborhood farmers came, and they've even offered to help get our alfalfa cut because we don't know if our round-baler is going to work or not. … They just all pitched in. The Deer Creek Fire Department came and cleaned up with their chainsaws, skid-steers, and tractors, and the Grant County Sheriff's Department came.

“It's just nice having some people to come help you.”

Getting help from friends and neighbors gave the Whittingtons a clearer idea of what to do next. As soon as possible, Kendall said, the couple will begin tearing the rest of the barn apart, salvaging what items they can from the inside.

The task of tearing the tall, mangled barn down will require the use of heavy machinery and lots of time, Kendall said. Nevertheless, it's something that has to be done.

As for the Whittingtons and their farm, they will move on.

“We'll start getting the torn-up building out and rebuilding on this pad,” Kendall said. “That's what we need to do. That's one of the reasons we bought this place.

“It's just one those deals. Like everybody else, we'll keep on pluggin'.”