Review: YESTERDAY is a "heart lifting ode to magic, music, and love" 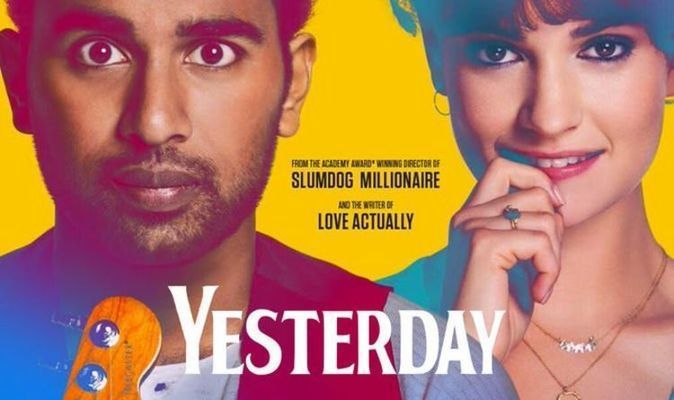 “You want a good life? It's not complicated. Tell the girl you love that you love her, and tell the truth to everyone.”

Danny Boyle's high-concept romantic comedy YESTERDAY premiered last weekend and, as the poster itself declares, it is the “feel fantastic” movie of the summer. A heart lifting ode to the magic of music and the power of love, YESTERDAY is a must-see romantic comedy.

From screenwriter Richard Curtis who has made such iconic tear-jerkers and heart-thumpers like LOVE, ACTUALLY, ABOUT TIME, and PIRATE RADIO, this film tells the story of struggling musician Jack Malik (Hamish Patel) who, after a world-wide blackout, wakes up in a parallel universe where The Beatles never existed. Jack seizes this chance to take their music for himself, and is soon sky-rocketed to international fame and fortune which forms a wedge between him and the girl he loves, Ellie (Lily James). Jack soon discovers that living a lie comes with a cost, and that being at the top doesn't necessarily mean being happy.

Directed by Danny Boyle, who has made some iconic films like STEVE JOBS, TRANCE, and 28 DAYS LATER, the film is as pretty visually as it is spiritually.

The charisma of the lead played by Hamish Patel is palpable, and his co-stars like as Joel Fry as the bumbling goof roadie Rocky, SNL-alumn Kate McKinnon as Jack's ruthless and hilariously mean-spirited manager Debra Hammer, a surprise role by Ed Sheeran as himself, and Jack's own plucky love interest played by Lily James ensure constant smiles through-out.

It's a toe-tapping good time as Jack painstakingly recreates iconic Beatles tunes like the film's namesake “Yesterday”, “Back in the USSR”, “Across the Universe”, “Hey Jude” (hilariously retitled Hey Dude), and more. It helps that Hamish Patel is an accomplished musician in his own right and can sing the songs extremely well with an acoustic, soft flourish. He's reminiscent of Taron Egerton's excellent turn as Elton John in this summer's ROCKETMAN in the sense that he doesnt try to replicate the sound of The Beatles and, instead, makes the songs his own.

There's a ton of comedy to be had here, especially everytime Jack discovers something else about this parallel world which, also, doesn't have Coca-Cola, Harry Potter, or cigarettes, leading to a hilarious scene where he asks the flight attendant on Ed Sheeran's personal jet if they “have any Coke” which she replies wide-eyed with “I beg your pardon?” because obviously she thinks he means the drug.

I also cannot stress enough how hilarious the aforementioned Kate McKinnon is as Jack's manager. She is cartoon character composite of every “evil record label” from every music bio-pic and her dialogue and performance is just grand.

The film is relatively by-the-numbers as far as structure. He rises high and falls hard, but the journey is comforting. The film never becomes too serious for it's own good and is constantly aware of it's own absurdity, including a scene where Jack's marketing group is talking about the names for his album which he wants to name after The Beatles' own discography, leading to a hilarious moment where the black marketing exec gets completely dead-pan and says “The White Album” is a “racial issue”. It's all in good fun and is constantly funny.

The film includes a touching scene where Jack meets John Lennon who, never being a Beatle, is never assassinated and lives a happy life as a carpenter with his dog. This scene is the emotional climax of the film and has a surprise cameo by Scottish actor Robert Carlyle whom Danny Boyle fan will recognize from 28 DAYS and 28 WEEKS.

YESTERDAY will have you leaving the theater with a newfound appreciation of Beatles music and the urge to fall in love. I also saw SPIDER-MAN: FAR FROM HOME, so look for my review!