Review: SPIDER-MAN FAR FROM HOME is, surprisingly, a 'Home'run 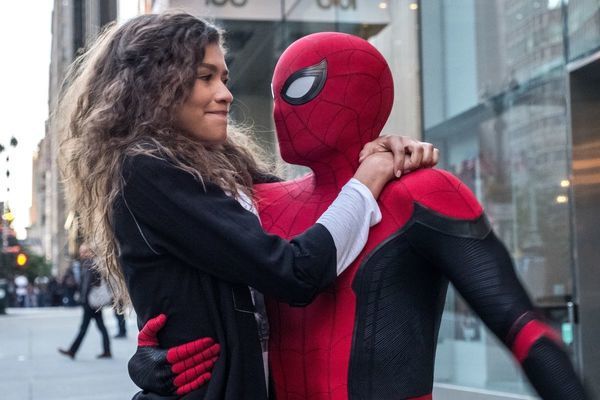 The Jon Watts-directed SPIDER-MAN: FAR FROM HOME released this past week and works overtime to correct the safe, bland, HOMECOMING to deliver a Spider-Man film that- while not perfect- swings just high enough to prove that Disney’s take on the neighborhood crime-fighter doesn’t need an Avengers ensemble to prove his worth.

Set after the events of this summer’s ENDGAME, FAR FROM HOME finds Peter Parker (Tom Holland) going on a school field-trip to Europe with his friends. His plans to make a move on his crush MJ (Zendaya) in the scenic European setting are quickly derailed when he gets recruited by Nick Fury (Samuel L. Jackson) to help a warrior from another dimension, Quentin Beck (Jake Gyllenhaal), fight a quartet of gigantic monsters called “The Elementals”. Peter quickly realizes though that not everything is as it seems, and that these towering monstrosities might not be the real threat after all…

Written by Chris McKenna (JUMANJI: WELCOME TO THE JUNGLE) and Erik Sommers (THE LEGO BATMAN MOVIE), Spider-Man’s latest adventure finally allows our hero to be more than just a weak imitation of Iron Man and, more importantly, makes the webhead feel like a real person. HOMECOMING’s bizarre treatment of Spider-Man as someone pathetically longing for validation is rectified here by showing Peter Parker as a teenager conflicted by his first love, his “duty” versus “responsibility” of being a super hero, and his own existential crisis of not allowing himself to realize what HE wants versus what people want OF him. Also, of course, there’s comedy and web-slinging action.

FAR FROM HOME plays much like an exotic spy movie with teenage hormones. We see gorgeous sights like Prague, London, Venice, and The Netherlands all while Peter Parker juggles Nick Fury’s super hero assignments and his own dilemma with finally telling MJ his feelings for her. What makes the latter work is that Zendaya’s “MJ” character has been given a dramatic overhaul from a “woke feminist” strawman into a “quirky weird girl conspiracy nut”. In the first film it was hard to sympathize or even relate to how Peter could be attracted to her, but this film it seems wholly believable. They share a goofy, awkward, chemistry that makes them work and by extension makes the film work. They never reach the heights of THE AMAZING SPIDER-MAN (2011) or it’s 2014 sequel which had both films built entirely around the romance of Peter Parker (Andrew Garfield) and doomed lover Gwen Stacy (Emma Stone) but it's a vast improvement from HOMECOMING.

The action this time around isn't a lazy CGI mess, and I found myself in love with Spider-Man's new black and red costume, a huge mark up from the glossy computer generated laziness of the “Iron Spider” suit he wore in the recent Avengers films. There's one knockout scene where Spider-Man faces Jake Gyllenhaal's villainous Mysterio in an illusionary dreamscape which has some of the Marvel Cinematic Universe's best visuals since DOCTOR STRANGE in 2016. This is rivaled in this film only by Spider-Man's scene on the skybridge with Mysterio where his Spider-Sense (Peter Tingle, here) awakens.

The film does have pitfalls with the two chaperone characters who aren't as funny as the writer thinks they are, and there's the obvious eye-roll at Mysterio being a villain born of Tony Stark just like The Vulture from the first film. The movie, though, does a good job at finally telling the audience (and Peter) that they need to move away from Iron Man.

One scene in particular finally kicks Peter's ass into gear as he stares, watery-eyed and defeated, at Happy Hogan (John Favreu) and explains he's “not Iron Man” to which Happy replies no, he's not, and he never will be. It seems, after one solo film and 3 appearances, Spider-Man is finally “Spider-Man” instead of “Iron Boy”.

The film's ending suggests a bold direction that the third film could go in, as Peter's world is finally turned upside down, seemingly because the writers have embraced Peter Parker's nature as an unlucky character that gets beat down by life at every turn, but still retaining an optimistic and heroic outlook. In HOMECOMING Peter never suffered, negating the core value of Peter Parker. In this, Peter faces moments of crisis that are peppered throughout, only to culminate with him thinking he's finally got everything figured out...until the rug gets yanked from him, sending he web slinger into free fall.