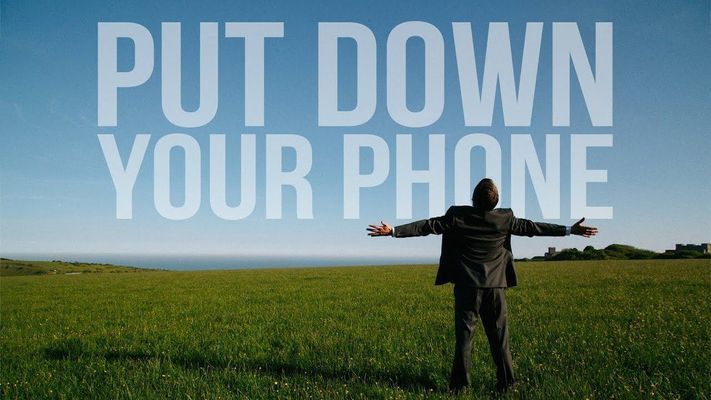 Call me cliché, but there’s nothing more important than living in the moment.

Last week, I was able to spend some quality time with two of my best friends, Rudy and Mathew. For a few days, the gang was back together, and we had a blast. We rode four-wheelers, shot off fireworks, ate good food, and watched hilarious movies. It was some good “Bro” time.

When we were hanging out, we spoke face-to-face. We completed activities together as a team. Everything we did revolved around being there, together, in-person.

In my opinion, most teenagers our age don’t really know how to do things that way. Why? Because of America’s favorite electronic gadget: the smartphone.

The smartphone is both a blessing and a curse. Fancy little keyboards let you talk to just about anyone, anywhere. Cameras in the phones allow you to preserve moments in time forever.

Both of those are good things. But doing them over the phone isn’t the same as doing them in-person; ultimately, we lose when we rely on electronics to live our lives for us.

In 2019, finding people to have a conversation with is hard. Yes, there are plenty of people who would love to text you for hours on end. But to me, that’s not really conversing. That’s keyboarding.

When I use the term conversation, I’m talking about sitting together over a cup of coffee and chatting about everything under the sun. Real conversation is more than small talk, and it has more value than an electronic message coming across your screen that any old robot could have “cooked up.”

In a real conversation, you use your active listening skills to 1) hear what a person is saying, 2) process that information, and 3) provide a response that is thoughtful and engaging. That’s the point of it all.

With a smartphone, you can’t do that. You can’t hear the inflection and tone of one’s voice when you send a text. You can’t reach out and give a handshake or a hug. And you can’t look the other person square in the eyes while you speak – something people should do more often.

And how about those darned cameras? Now that cameras are built-in to our phones, every person with two hands and a Facebook account thinks he or she is a professional photographer. (Hint: They aren’t!)

For those of us who are photographers, that’s annoying. But the overuse and abuse of smartphone cameras is even sadder for another reason: People are so busy taking pictures of everything they do that they forget to enjoy what they do.

One of the trips my friends and I took this week was to the zoo. (I don’t care how old you are; you are never too old to go see tigers and lions.)

While we were there, we took a couple of pictures, yes. But we weren’t running around the place like animals (pun intended) to get pictures of each and every plant, bug, and critter around. We enjoyed our leisurely strolls around the park, basking in the beauty of nature at its finest.

Other folks we saw, however, took a different approach. They feverishly ran towards exhibits, quickly snapping a photo before running to the next one. Really, they didn’t even look at the animals with their own eyes; the only glimpses they got were through the screens of their phones.

How sad is that?

Yes, they’ll have those photos forever. But they will never have the experience of going to a zoo and admiring the wonders of nature on their own. When my friends and I went, we had a good time experiencing the zoo rather than simply photographing it.

Friends, life is short. I believe that more folks ought to worry about living an exciting one with the people they love instead of texting it away and trying to retain some of it through photos. This week, I challenge you to live in the moment, and to make the most of each and every one.

You won't be disappointed.