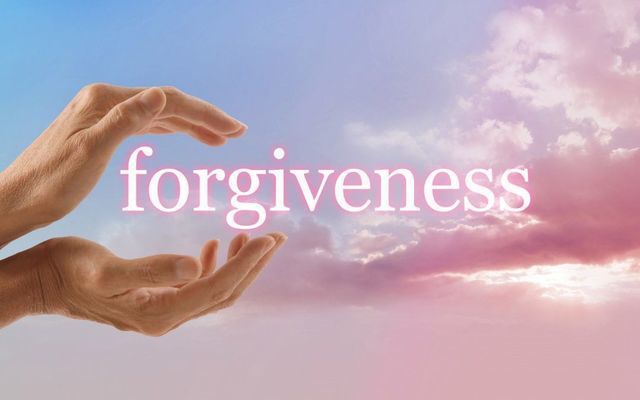 We Christians talk a lot about forgiveness. We talk about God forgiving our sins, about others forgiving us of our wrong doings, and of course about us forgiving the others that had wronged us. Forgiveness is a very important part of the Lord’s Prayer, for it is in essence the gospel in all of its entirety.

In 2 Corinthians 5:18 we read, “18  Now  all  these  things are from God,  who reconciled us to Himself through Christ and gave us the  ministry of reconciliation,” and this tells us specifically what our ministry is…”reconciliation.”

In most relationships that have been destroyed, there is often times one or persons that is guilty of doing or saying something that truly hurt the other. We can often times call that wrong a sin. In our relationship with God, because of God’s very nature, God and sin cannot coexist together. God’s righteousness is such that sin cannot exist with Him.

When a couple, or family, that has been hurt by one or more wrong doings (sin), healing does not just happen. It takes an act of repentance and an act of forgiveness. Now, most of us Christians are pretty good at this between ourselves and God. It’s easy for us to ask God, the fully righteous and all powerful God, to forgive us, and we most often truly mean it. This is the act of repentance.

Repentance is not the act of doing something wrong, and just saying those magic words “Please forgive me” and that is it. If in your act of repentance you plan to do that sin again, and you want to, well, this is not true repentance. True repentance is not just saying those words of asking for forgiveness, but truly, deep in your heart, you truly do not want to repeat that sin again. And, if you do, you feel terrible about it.

Like I said, we Christians are pretty good at doing this repentance with God, but when it comes to each other, well we don’t have such a good track record. And, it is not just with the repentance part, but the forgiveness part as well.

Now, it is often times really hard for us to forgive someone once, but Jesus goes much further than that. In Luke, chapter 17, we read, “Be on your guard!  If your brother sins, rebuke him; and if he repents, forgive him.  4  And if he sins against you  seven times a day, and returns to you seven times, saying, ‘I repent,’  forgive him.”

This is a great time and verse to point out the difference between the letter of scripture vs the spirit of scripture. Jesus is NOT saying that all you have to do is forgive someone just seven times, and on the eighth you can be done with them and not forgive. That is why Jesus placed this all to happen in one day, as an extreme example that we are to always offer forgiveness when someone repents.

I want you to think of the last time you were hurt, offended (maybe last time you were on Facebook), and imagine that same person doing the exact same thing to hurt you seven times in one day, and afterwards coming to you to say there were sorry. Now, most of us would say that this person’s repentance, at least the first six times was not a true one. We often want to see “the fruit” of repentance, but how can we? The only judge that can discern a true or false repentance is the one that can read a person’s heart, and that means the only person with that specific skill set is Jesus (God).

Jesus does not ask us to “judge” that person’s repentance, because he knows that only God can judge a person’s heart. No, Jesus just tells us that we have to accept their repentance and in return offer forgiveness.

I want to make one very important point clear. Forgiving someone does not mean you have to place yourself in harm’s way again and again. If you have an abusive spouse, family member, or friend, of course we are called to forgive, but that does not mean we have to stay or continue that unhealthy relationship.

Here is a universal secret; not forgiving is carry around a heavy load of bitterness and anger. It is that which keeps us up at night thinking about what we should have said or done. It does nothing against the one that has sinned against you, but it certainly robs you of your peace.

In Ephesians 4 we read, “31  Let all bitterness and wrath and anger and clamor and slander be  put away from you, along with all  malice.”

Doesn’t that sound pleasant? Who wouldn’t want to get rid of all of their bitterness, their wrath/anger, all of the drama and slander in their life? Don’t argue on Facebook will help, but the only way for this to truly and fully happen is in verse 32, “32  Be kind to one another, tender-hearted, forgiving each other,  just as God in Christ also has forgiven  you.”

You see, when you forgive someone, and I know it can be difficult and it might take some time, but when you do, it is like putting down a huge bucket that had been filled with heavy rocks, and walking away from it. All of that resentment is gone! All of that anger is gone, and hear this, all of that pain is gone!

With the exception of unhealthy relationships, the two acts (repentance and forgiveness) are both acts of love, and the bridge of reconciliation. This is what paves the road to a renewed relationship with each other, and with God.

However, God knows that we are not as good at this stuff with each other as we are with Him, and that is why Jesus gave us a very serious and dire warning. You want to know where that warning is. It is the very next verse after the Lord’s Prayer in Matthew 6, “14  For if you forgive  others for their transgressions, your heavenly Father will also forgive you.  15  But  if you do not forgive  others, then your Father will not forgive your transgressions.”

How easy do you want God to forgive you, to judge you? Then check your own heart. How easy are you willing to forgive those people that have hurt you?