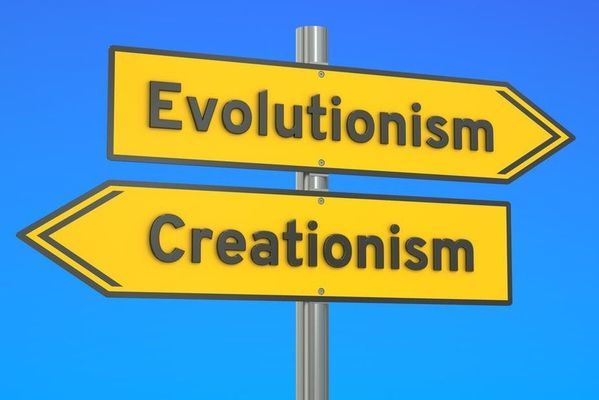 “In the beginning, God created the heavens and the earth.”

So, how old is the earth? If we look at scripture and take it at face value, we would say it is just a few thousand years old. However, if we look at science, it tells us that our earth is about 4.5 billion years old. We also don’t find dinosaurs in the Bible, but we certainly have found a lot of dinosaur remains.

On top of all of this, we throw in there – for good measure – the theory of evolution.

The theory of evolution basically says this: All life on earth came to be when several different factors came together, and a single-cell living organism came to be. And, from that single-cell organism, all live eventually grew as millions of years passed and life became more and more complex.

It comes as no surprise to my readers (the greatest readers in the world, by the way) that I believe in creation. So, I am not going to go down the path of strict evolution – and evolution with no God – but I will talk about evolution with a God. Let us look at that first.

Could God – all-powerful, all-knowing, and in all places – be able to create the Big Bang? He spoke, and the universe was created in that moment in time? Also, could God have already known and understood that He made everything that would be required for our planet? That our life would one day walk into existence?

Is this possible? What does the Bible say?

In verse 5, we read: “God called the light “day,” and He called the darkness “night.” Evening came, and then morning: the first day.”

Okay, fine. We got day and night on first day. But the Bible says that the sun and moon weren't created until the fourth day. If the sun wasn’t created until day four, what the heck was that light on day one? Could it have been the light from a Big Bang? Maybe.

Also, we count one day as a 24-hour cycle with one sun. However, there are over six sextillion suns in the universe. So, what is a day with that? I have no idea, but you can get the gist of this line of thinking.

Now, the young earth argument is taking the Bible at face-value. Here, we get an earth that is 5,779 years old. This, by the way, is the same reason why the Jewish year is 5,779. They believe that creation started 3,761 years before Jesus was born.

How does one align this thought with dinosaurs and science? Is God able to create an earth that already has a history? Yes, my God is that powerful. In that case, this new earth would have within its own creation a history that did not really happen.

Here's another way to explain this: If God were powerful enough to create an earth with different plants, animals, races of humans, languages, cultures, and people of different ages, each person would have a history that was planted in them at the time of creation. So, even though they had just been created, they have memories.

They believe that they really did go to grandma’s house for Thanksgiving last year.

Do I believe God is powerful enough to that? Yes. Do you? If your answer is “Yes,” then how do you know that we were not just created? It starts to get a little tricky. But again, you get the idea of this thinking.

The old earth argument states that God did create everything, but it was millions of years between one day and the next. At least until day four, right? The earth was created, and it developed over a very long time. Dinosaurs roamed this planet millions of years ago; humans, as we know them, have only been on planet earth for a relatively short time. (Well, short compared to the length of time that dinosaurs were around.)

Now it is time to answer the question of which one is right – or, at least, more right. Here it comes, and I hope you are ready for this truism: WHO CARES?

Stop and think about this for a moment. Is it a salvation issue?