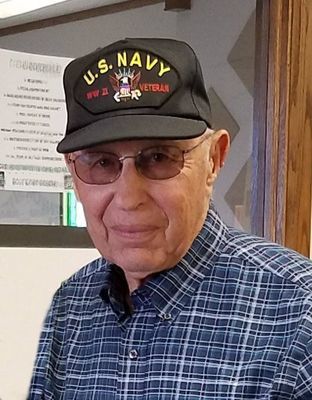 Paul Bernard Messenger, 91, entered into Heaven's gate on Sunday, July 14th, 2019 in Arkansas City, Kansas with family by his side.

Burial will follow in the Mt. Hope Cemetery. Friends may greet the family 6-8 p.m. Wednesday evening at the Rindt-Erdman Funeral Home and Crematory.

He was born on August 17, 1927 to Herma A. and Dennie M. Messenger in the family home 1 mile north of Hillsdale, OK, arriving 15 minutes before his twin sister, Paulyne Bernice.

Paul was 1 of 11 children from a family that farmed land in the Hillsdale, OK, area. He had many fond memories and stories of growing up there. From having an airplane like Charles Lindberg's land in their pasture because of fog and hosting the pilot for the night, to Kit the Shetland pony and his antics, to driving the C Case tractor at nine years old, to jumping in the water tank that the cows drank from in order to keep cool, to milk fights with his sister Dee while doing chores, Paul's vivid memories would put a smile on his face every time he got a chance to share them.

Paul attended and graduated from Hillsdale Schools where he played the baritone and trumpet in the band, played basketball, played end and linebacker in football, was the team catcher in baseball, and played singles and doubles in tennis.

In 1945, Paul joined the Navy and off to San Diego and San Francisco, CA the farm boy went! He was a Fireman 1st Class and worked in the engine and boiler rooms of the CL 87 Duluth Cruiser and ARG 1 Oglala until he was honorably discharged in 1946.

On July 23rd, 1947, Paul married the love of his life - Betty Arlene Davis - in the Olive Chapel United Brethren Church near Hillsdale, OK. After their honeymoon to Colorado Springs they drove to their "new" farm and home eight miles east of Blackwell, OK, where they started their life together with very little. But, they made the most of what they had and were blessed with 4 children whom they adored.

In 1966, Paul and Betty built their home in Blackwell and moved to town while they continued farming their land east of town and in southern Kansas. In 1984, Paul and Betty moved to their farm near Gueda Springs, Kansas, where Paul continued to live until 2016.

Paul's heart was always focused on serving God as he was taught in the Hillsdale Congregation Church.

Closely following that were service to his country and being the best husband, father, brother, grandpa, and great-grandpa that he could. He got immense joy from attending all types of events involving his children and grandchildren, even as recently as this past May. Paul always enjoyed hosting family gatherings and watching the family grow with graduations, marriages, and grandchildren arriving.

Paul was predeceased by his wife of 55 years, Betty, his second wife, Shirley, his parents, 9 brothersand sisters, and grandson Terry Denney.

A memorial has been established for the Mt. Hope United Methodist Church or the Hillside Christian School. Contributions may be made through the funeral home. Arrangements are under the direction of the Rindt-Erdman Funeral Home and Crematory. Online condolences may be made at www.rindt-erdman.com.