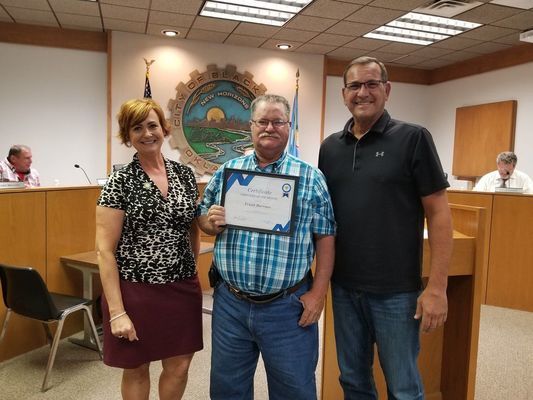 In the Blackwell Municipal Authority meeting, City Manager Janet Smith presented a check for $624,900.29 to the BMA from the Blackwell Zinc Smelter/ Freeport McMoRan escrow account. The check will close out that account, which was established to help pay for the completion of the city’s wastewater treatment plant. The check is expected to be one of many the city will write in the near future in an attempt to close out “specific and quirky accounts” that have been unused. This move will help the city fund other projects, officials say.

After closing out the account, the BMA voted to cancel a September 19 meeting. The Oklahoma Municipal League will hold a conference from September 17 - 19, and city staff and council members have been encouraged to attend it. To account for the lost regular meeting, a special meeting will be held September 26 at 6 p.m. at City Hall. This meeting will be for both the BMA and the Council.

To close out the BMA meeting, the Council approved a funding plan for one new staff position in the city’s utility office. The salary for the position is not to exceed $54,000 per year. That figure includes hourly wages, insurance, retirement, and other benefits.

With the BMA meeting over, the Council convened shortly after 7 p.m. To begin the meeting, Smith and Electrical Department Supervisor Greg Sixkiller recognized Frank Barrows as the city’s “Employee of the Month.” Barrows was honored by Mayor T.J. Greenfield and Smith at a meeting last month for his 40 years of service to the city.

Lisa Vargas, head librarian at the Blackwell Public Library, announced that she was celebrating her second year at the library. She informed the Council that participation in the library’s programs had doubled — and even tripled, in some cases — over the course of the last year.

Blackwell Fire Chief Cory Hanebrink spoke next. He informed the Council that the city is working to fix two damaged storm-warning sirens. Once repaired, the sirens will be tested again.

Once Hanebrink’s report was finished, the Council appointed Deonne Gates to a term on the Blackwell Tourism and Development Board.

Council members then voted to purchase a LifePak 15 monitor/defibrillator as well as a Lucas III chest compression device for a total of $61,253.96. The medical devices, which will be used by the fire department, were paid for through the Dave Morgan Foundation.

Hanebrink became emotional as he explained the need for the boat. Flooding in late May claimed the life of Blackwell Navy veteran Larry Larimore, and Hanebrink said he wanted Blackwell’s first responders to be ready to have the equipment they need for water-related rescues in the future.

Greenfield commended Hanebrink for the work he has done to benefit Blackwell and the surrounding areas.

The Council next approved a measure allowing the Blackwell Police Department to solicit bids for ammunition and tactical body armor.

After sifting through the routine bid solicitation measures, the Council entered into executive session to further discuss the city’s recently completed report on allegations of financial misconduct. The Council remained in executive session for roughly one hour.

Before the meeting was adjourned, Kennedy also informed the Council that the city had been given a piece of property located at the intersection of 13th Street and Doolin Avenue. The property is currently home to the American Red Cross. Kennedy said that the property will be used to develop a “new site” to be used by the Blackwell Fire Department.