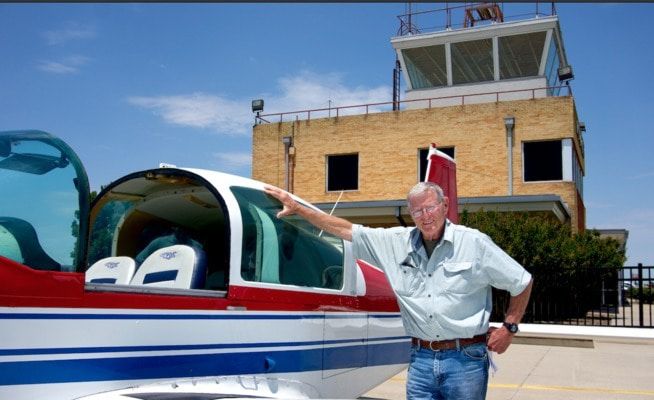 U.S. Senator Jim Inhofe is asking for public comment on a piece of legislation that he hopes will “take flight” in Congress.

When Inhofe, R-Tulsa, isn't casting votes on Capitol Hill, he can often be found flying around Oklahoma to visit with his constituents. He's got more than 11,000 logged flying hours, and some of those hours were spent in Kay County. Inhofe regularly flies into the nearby Ponca City Regional Airport to attend monthly “fly-in” breakfasts there.

And in Congress, he's been called a defense “hawk” for his efforts to increase the nation's military spending.

That's why he's asking for public input on a bill he is drafting to advance the two things he loves the most: the military and aviation.

Inhofe is in the early stages of writing a bill that would establish the National Center for the Advancement of Aviation. According to a release from the senator's office, the organization would promote aviation-related programs that help develop the industry's workforce and help former Air Force employees find careers in the private sector.

“Standing up a national center to advance aviation by facilitating ideas and cooperation would help us address the demands and opportunities associated with a safe and vibrant national aviation system, and would foster the collaborative partnership across all stakeholders to maintain our nation’s leadership and comparative advantage in aviation,”  Inhofe said in a statement.

“My legislation would form an   independent, non-government center tasked with four key goals to support the future of American aviation: foster a diverse and reinvigorated aviation workforce, facilitate new and expanded STEM educational opportunities for high school students interested in aviation, serve as a central repository of safety and economic data, and support research and collaborate on training methods and new technologies.”

According to his draft of the bill, the NCAA will be a private, non-profit entity governed by a 10-member board. While it will not be a government agency, its board will be led by the administrator of the Federal Aviation Administration. Appointments to the board will be made by the Secretary of Defense and the Secretary of Transportation. Members of the board will serve three-year terms, and they may be reappointed. No limits on the number of reappointments a board member may receive were included in the draft.

The center will remain non-partisan and non-political, meaning it cannot endorse or support candidates for public office, according to the draft.

Inhofe announced on July 26 that he is seeking comments and suggestions from his constituents regarding the bill. Those wishing to give feedback to the senator can do so by visiting his congressional website, http://bit.ly/InhofeNCAA.

The measure to create the NCAA is not the first aviation-related bill Inhofe has introduced this year. Just three days before asking for public comment on the NCAA bill, Inhofe and Senator Angus King, I-Maine, introduced the “Promoting the Launch of Aviation’s Next Era Act of 2019,” better known as the PLANE Act. According to Inhofe, the bill will allow rural airports to serve as disaster relief areas during times of crisis. Inhofe believes the measure will afford rural citizens and aviators greater access to emergency resources.

“This bill would provide the opportunity for general aviation airports to be designated disaster relief airports to better support community disaster response and recovery efforts,” Inhofe said. “After the recent flooding and tornadoes in our state, Oklahoma knows all too well the need for improved infrastructure when responding to natural disasters. I’m pleased my legislation will give this additional support to communities in our state and across the country.”

According to govtrack.com, a website used to measure the advancement of congressional legislation, the bill is eligible to be heard by the congressional committee overseeing aviation. If the bill is passed out of committee, it will be voted on by the House and Senate.

Shortly before introducing the PLANE Act, Inhofe celebrated the confirmation of Stephen Dickinson to serve as the director of the FAA. According to a release sent by Inhofe's office, the senator met with Dickinson in May to discuss “shared aviation priorities.”

“Stephen Dickson is a great choice to lead the FAA, and I am pleased that he was confirmed,” Inhofe said. “He’s got the right background ― with a decade of service in the Air Force and over 30 years of experience in aviation. I look forward to working with him on implementing my provisions from the 2018 FAA Bill, including building on the success of third-class medical reform and making sure that the FAA invests in the future of our aviation workforce, as well as in small, general aviation airports to support local communities in Oklahoma and around the country.”