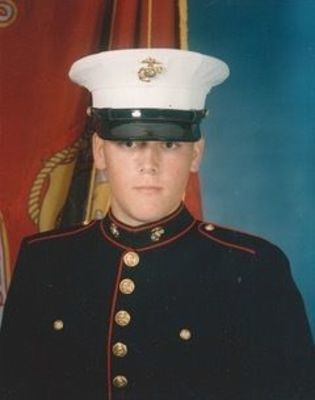 A celebration of his life will be held at 2:00 PM on Wednesday August 14, 2019 at the First Baptist Church, Blackwell, Oklahoma. Jessie will be laid to rest with military honors at Blackwell Cemetery following the service. Arrangements under the direction of Trout Funeral Home & Cremation Service of Tonkawa.

Jessie was born on April 26, 1984 in Blackwell, Oklahoma to Merl Allen and Stephanie Lynn (Stephens) Jones. Jessie worked as a Disposal Operator at D & B Oil Field Services. He was a proud United States Marine Corp Veteran, serving two tours of duty in Afghanistan and Iraq. He enjoyed playing the drums, hunting and fishing. Jessie was a huge OU football fan. He loved to drive fast and enjoyed going to concerts with his brother Casey. He took great pride in being a member of the Blackwell VFW.

Memorial contributions may be made to the Blackwell VFW, 1006 W. Ferguson Ave, Blackwell, OK 74631. The family would like for you to leave memories of Jessie at www.troutfuneralhome.com